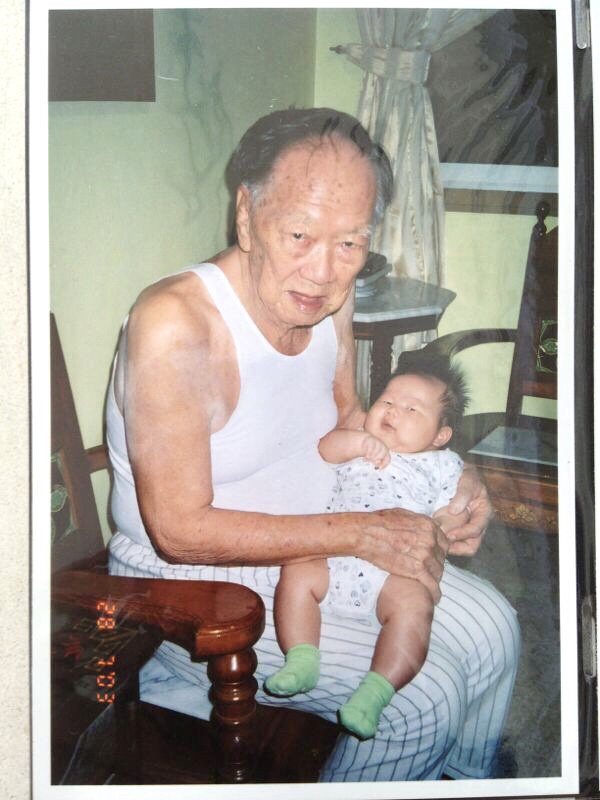 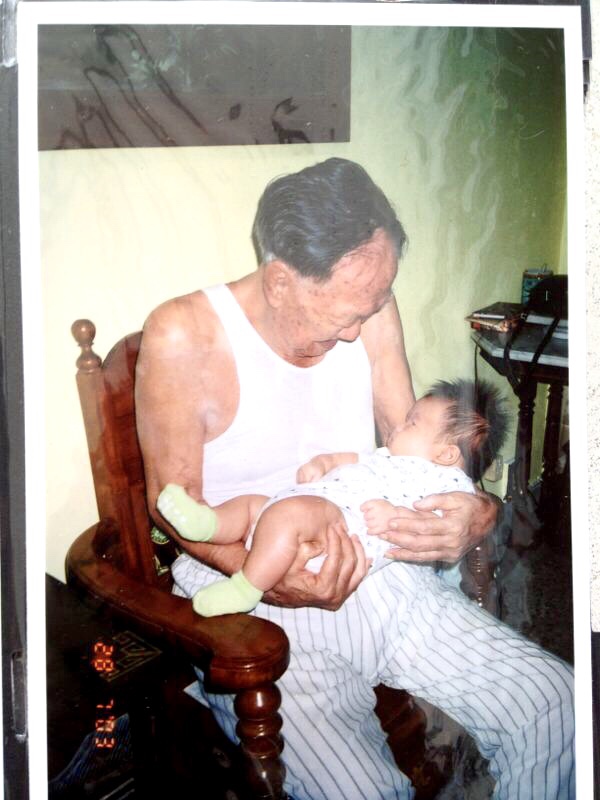 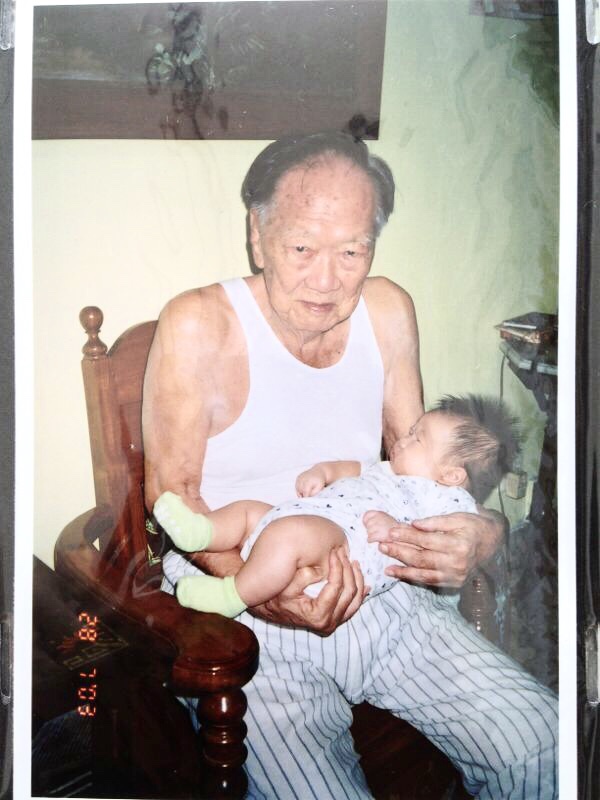 He was a gruff man.

But I loved that man.

My grandfather was gruff, patriarchal, serious and family oriented. He was the father figure in my life and it is funny how I have evolved to be a little like him today.

My late father ? Well he had many failings as a man and all my negative attributes came from him – a fiery insane temper (now kept deep deep down but when it erupts, lava flows), impatient, aggressive, and addictive behavior.

We had a fistfight when I came of age and I left home.

The one good thing that came out of all this was I vowed never to be like that with my own son. And each time I’ve felt the demon rising, I remember that I’ve made this vow and tell myself to reject all that is inherent in me and to reach out to my son.

And I do think today that I’m close to my son in a different way – perhaps not the most expressive or apparent but I do think we have a bond that I’ve never experienced with my father.

I’ve come to terms with the relationship with my father in my adulthood and he passed on the very day of my 50th birthday.

But the point is he was never the father figure in my life.

It was always my grandfather.

My grandfather smoked a pipe.

As a young boy, I remember sitting next to him while he went through the ritual of cleaning his pipe, and then inhaling the sweet scent of the sweetish aromatic leaves when he lit it up and puffed to light up the pipe.

That routine was very nostalgic for me and it was one of my fondest memories growing up.

When I came of age, I bought him a Dupont pipe with my first pay check.

The old man was touched.

He didn’t say much but I could see it on his face when I gave it to him.

He kept it like a prized possession but continued to use his old pipes.

He eventually did bring it out in later years and used it to his dying day. 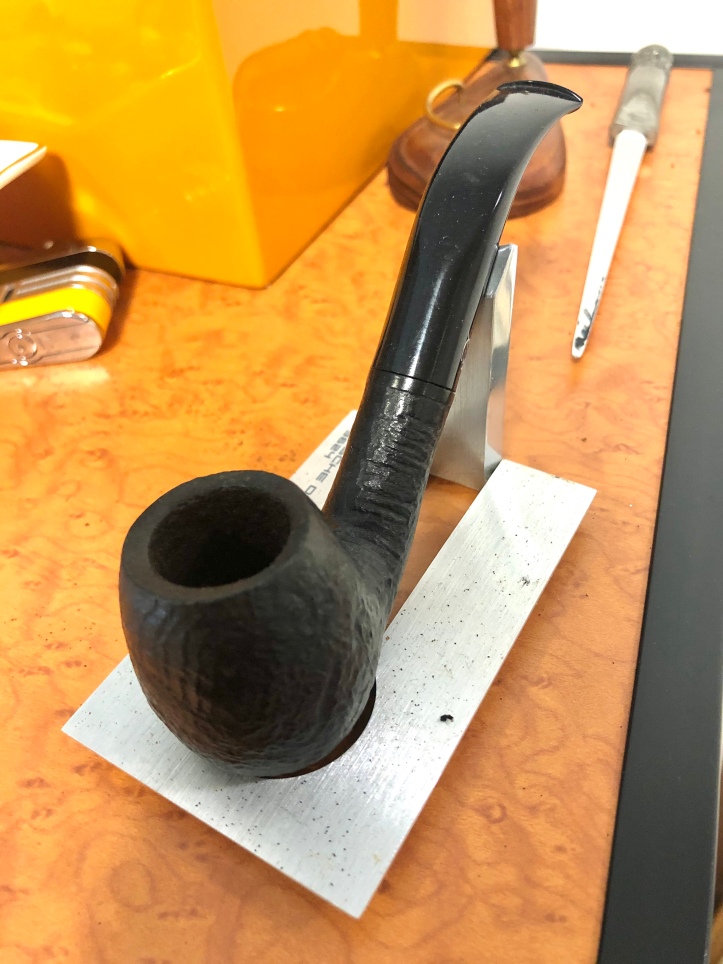 When he passed, I took over his pipe and it now rests in my office taking center stage on top of my wine fridge.

I have my own pipe.

And every time I puffed on it, the aroma and the entire experience brings me back to him.

My Grandad has 9 kids and many grandchildren. I was the eldest grandson so in the Chinese tradition, the oldest grandson is considered to be like the youngest son.

I think I was his pride and joy.

He had a robust timber business in Sumatra and every male in the family worked for him (5 sons and all the grandsons).

Everyone dropped out of school early and got into the the family business.

They and their entire families were all dependent on the family business for their survival.

When I was 17, my grandfather had special plans for me. He sat me down and spoke to me. He wanted me to be involved in a substantial part of the business.

I declined and told him I would study as far as I can and even if I became a blue collared worker, I will work in Singapore.

The old man was disappointed. I could see it on his face.

But later into life, I was to see the proud look on his face when I had a successful career in the law.

That look was worth everything to me.

It wasn’t a pretty picture.

Nobody had any ambitions and when my grandfather retired and left the business to all the males in the family, they ran it into the ground.

They took his money, his tractions of land – everything.

Many of them had mistresses and second families.

I became even closer to the old man in his twilight years.

He became frail and sick after my grandma passed.

He commuted between Indonesia and Singapore and whenever he came to Singapore, I would come home to spend time with him.

One day, I heard he was sick and had returned to Singapore. I just had Gavin my youngest son at the time. My Grandfather had never met him as he had stopped commuting to Singapore for a while because of his ill health.

That night, I told my ex wife that I didn’t have a good feeling, and I felt it was imperative that I bring Gavin to my grandfather even though it was getting late at night – approaching 11 pm.

I reached home and put Gavin in his arms. You can see from the pictures above that he smiled.

Actually he teared first. We Ong men are not big on crying and that was the first time in my life that I saw him tear.

Then he smiled when Gavin stirred and yawned.

That was the last time I saw my grandfather.

A few days later, he returned to Indonesia and passed on. 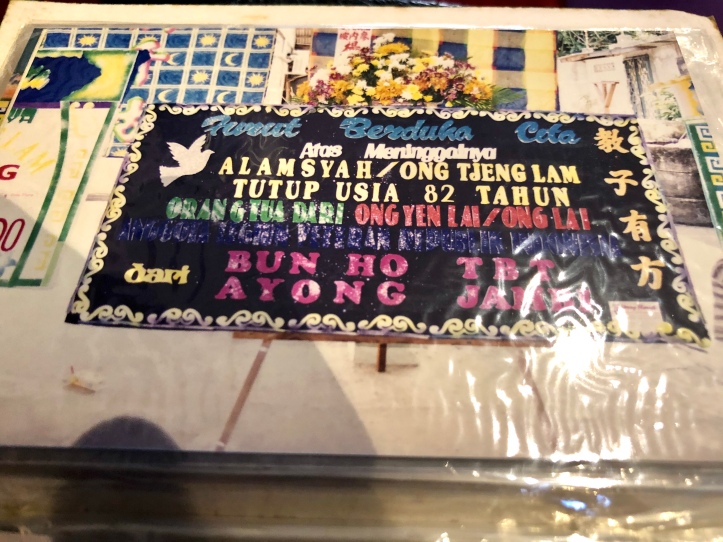 I went to Indonesia for his wake.

It was one of three times in my entire life that I cried. 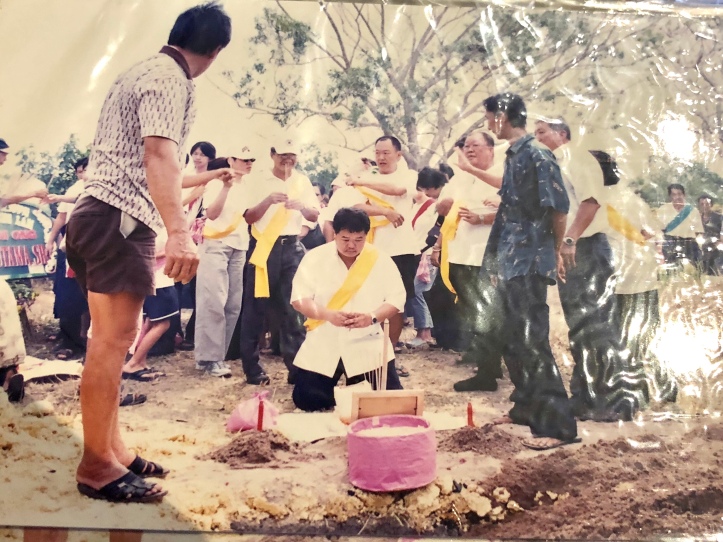 I sobbed uncontrollably when we lowered him into the ground at a mountainside grave that had been set aside for him.

He was a village elder that had lived in that province for more than 50 years.

Also, the general commandant for that area was like his blood brother.

So they gave him a military funeral with honours. 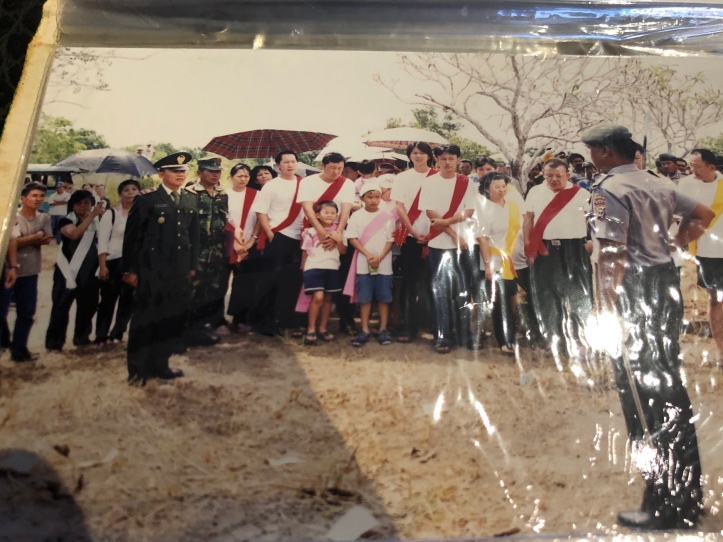 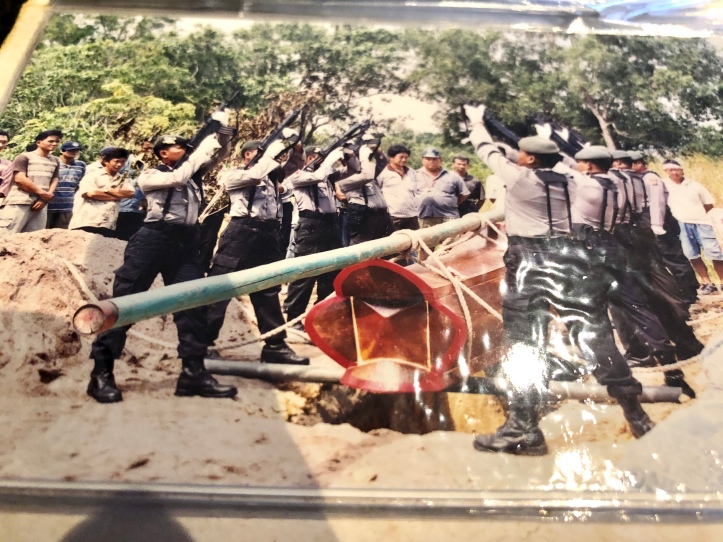 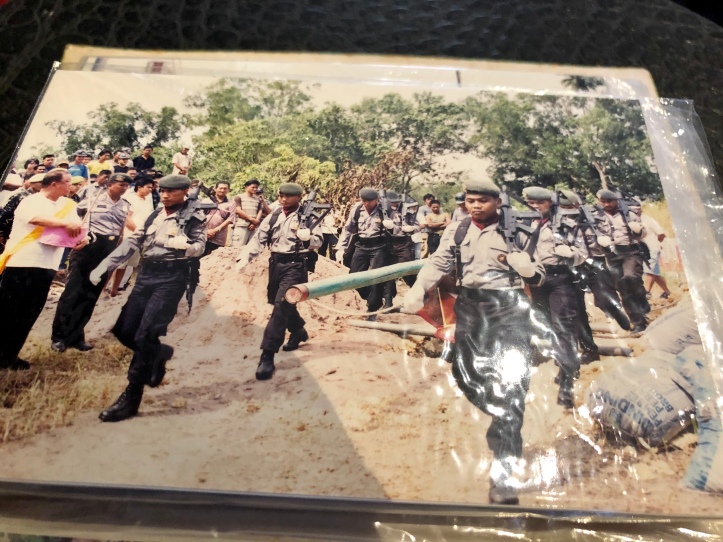 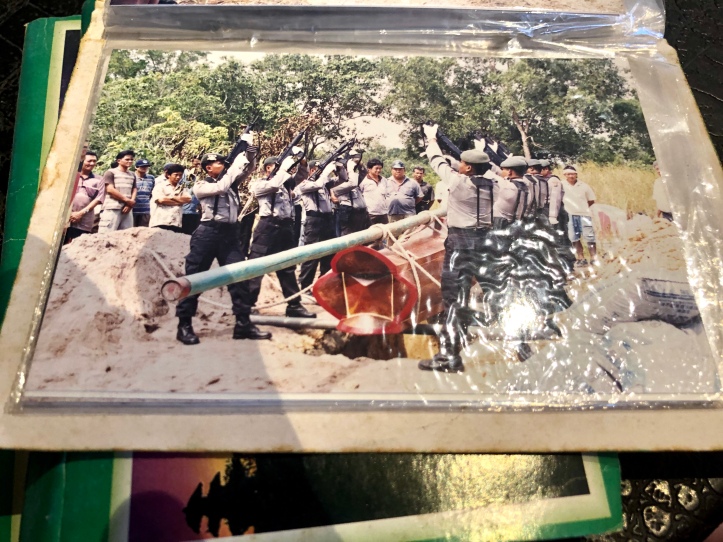 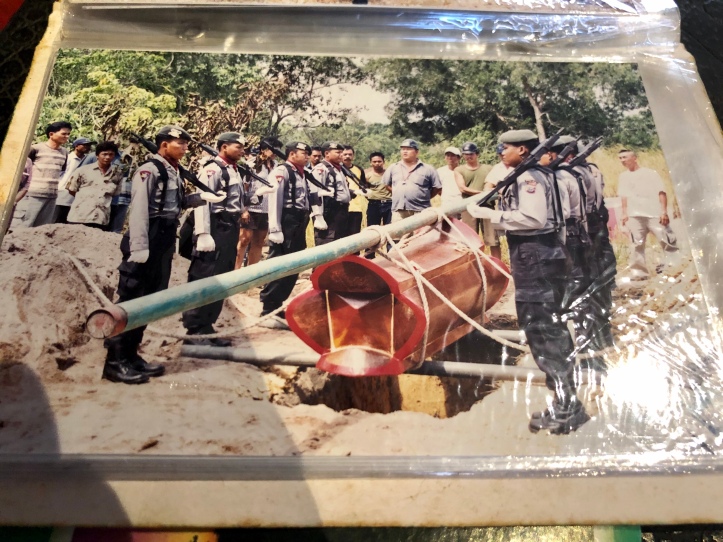 That night when we returned to the family home, no one wanted to sleep in his bedroom even though we were all crammed, as many of us had flown in for the funeral.

I asked to sleep in his bed.

That night I dreamt a beautiful dream. It was long and elaborate but when I woke up, I couldn’t remember most of it. 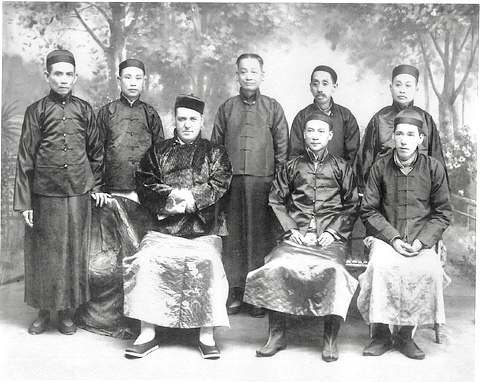 There were many other old men like him but wearing clothes like in a chinese kungfu movie sitting with him in rows and rows in the majestic Chairs.

There were these Chinese tablets that were everywhere. 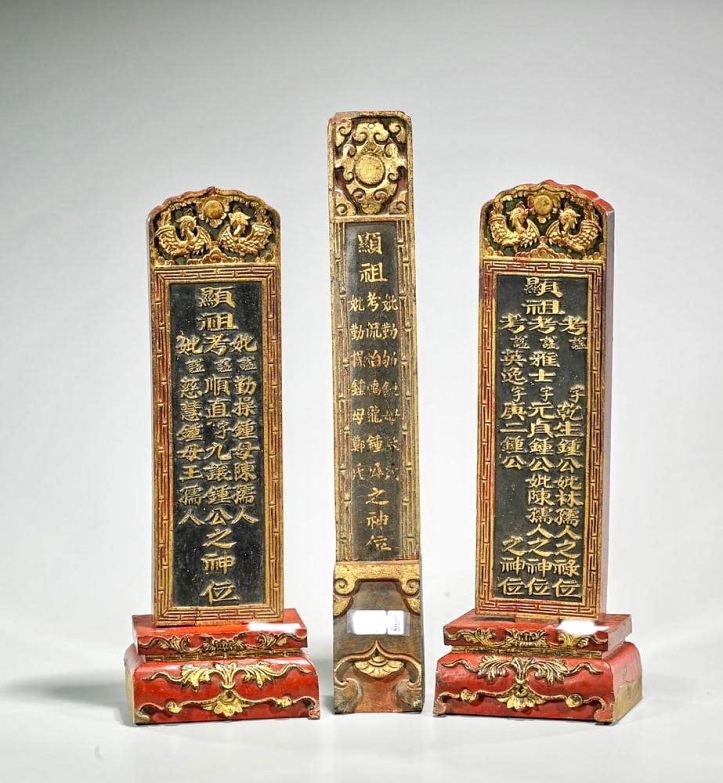 He was beaming at me.

Then it dawned upon me what that image meant.

He was amongst the Ancestors.

After the funeral, I was preparing to fly back the next day.

That evening, my mother told me there were murmurings amongst my uncles to say that as I was a lawyer, they were concerned whether I would somehow manipulate it such that I will get a bigger portion of his estate.

I told my mother to tell them that I will not stay for the reading of his will.

I will also renounce any share I had in his will (if indeed there was one ) and will walk away not knowing, provided I can get the only thing I wanted badly.

And I told her to tell them that I would fight anyone in the family through the courts who laid a claim to that.

In my grandfathers bedroom, a solitary small picture hung above his bed.

I have never seen that before.

And so I renounced and walked away. 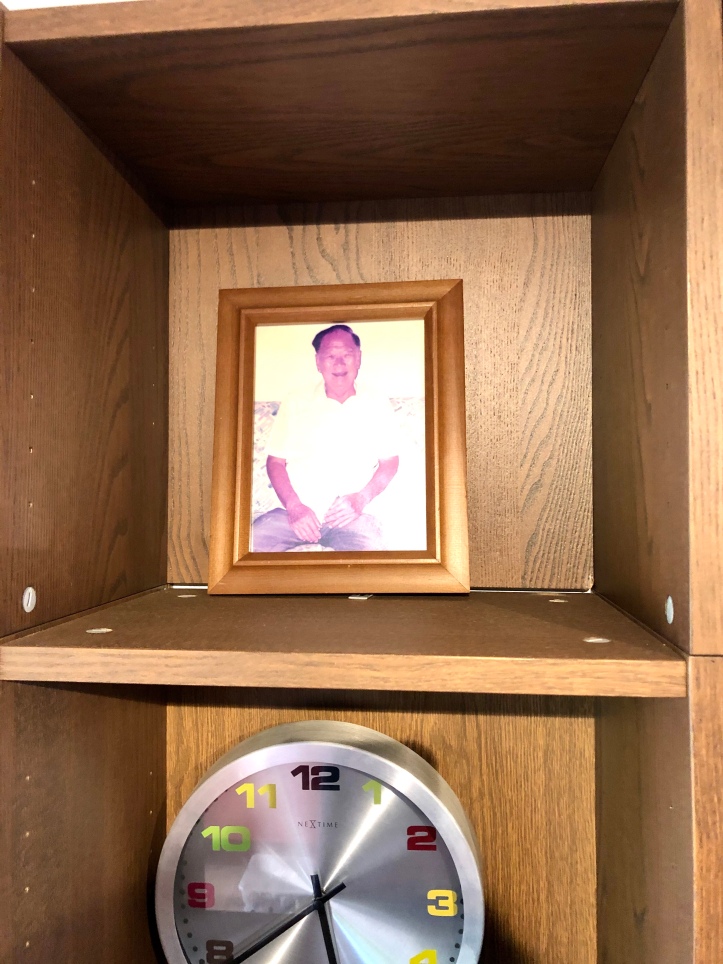 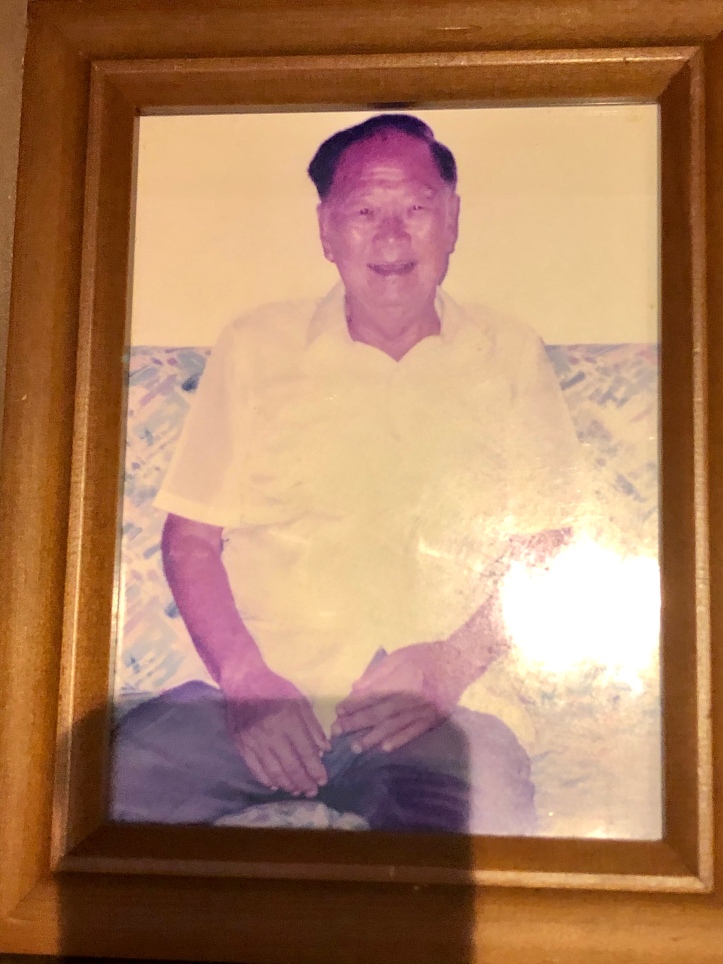 Today that picture hangs in my bookshelf bringing me great joy and comfort.

I still think of him to this day.