I was quite pleased when my ex colleague wanted to buy me lunch. I have just changed jobs and it’s nice to be fondly remembered and missed.

I was even more chuffed when she suggested the venue to be the National Kitchen at the former City Hall facing the Padang (now the National Gallery).

City Hall was where the Supreme Court was last located and was my office for several years in my early working career.

I am becoming a sentimental old fool and nostalgia now moves me. I have spent the first three years of my professional career in the judicial service and have very fond memories working in the courts.

My first office was in the old creaky Supreme Court (right in between Parliament House and City Hall), dark and sombre, resplendent with old school charm and dignified aura.

It was echoey and the high ceilings were homes to birds and bats. These creatures come back to roost at dusk and nightfall so one hears fluttering sounds throughout the night. It added a sometimes eerie atmosphere to the dim corridors where my office was located, and that fueled the ghost stories passed down gleefully from generation to generation.

Indeed, Supreme Court was rumored to be haunted, fueled by stories of suicides and a place where unsettled souls roam as it is the place where death penalties were handed down in sentencing over the years.

My colleagues were delighted to share with me stories about the corridor just outside my office in which a little girl in white was rumored to have been seen.

The word is that she comes out to play from time to time in that corridor.

She wants someone to play with.

So the creaking (of the old structures), fluttering of bats, and the occasional knock on the door at night (our rooms had no windows so once you closed the door, you were dead to the outside world) could be disturbing.

Knock on the door ? It was a sick joke that my colleagues never got tired off.

They would knock on my door when they passed my room just as they were leaving from work, especially late at night (I used to work late most days).

When I ambled to the door to open it, all I saw was an empty corridor.

The next day, they would deny that they had knocked and suggested that the little girl was lonely.

Messing with my mind was a favorite past time. 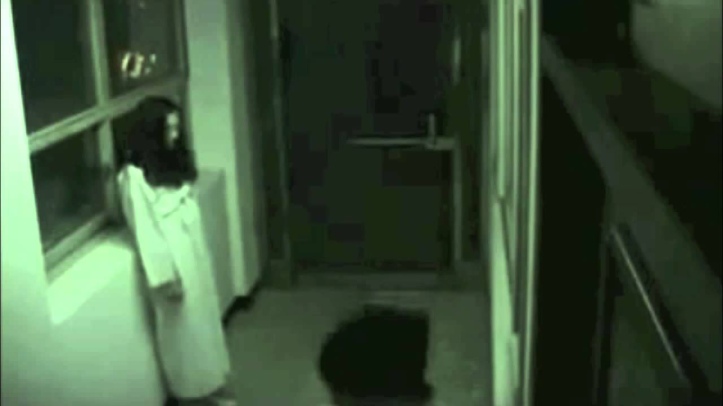 I pointed out that in Chinese folklore, spirits are afraid of magistrates (we heard civil cases but we were all gazetted as magistrates at law) as judges have a special superior aura about them.

But, they pointed out, folklore also talks about how magistrates are seen to be able to dispense justice both in the secular world and the spiritual world. So the spirits who cannot cross to the other side may want to approach a magistrate for help.

So they told me the little girl will approach me one day to cross to the other side.

I assured them that should I be approached by the little girl in white one day, I will certainly help her by giving her their (my colleagues’) home addresses.

Heck – I would even personally escort her to their homes.  Ring their doorbell and leave her there.

We (meaning the courts) subsequently moved next door to the City Hall building. In fact, the premises where National Kitchen is located is directly above my old office in City Hall.

A trickle of nostalgia filled me as I walked up the stairs to the restaurant. 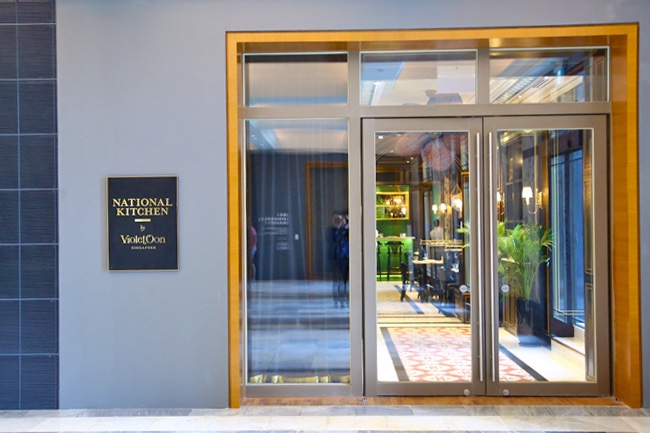 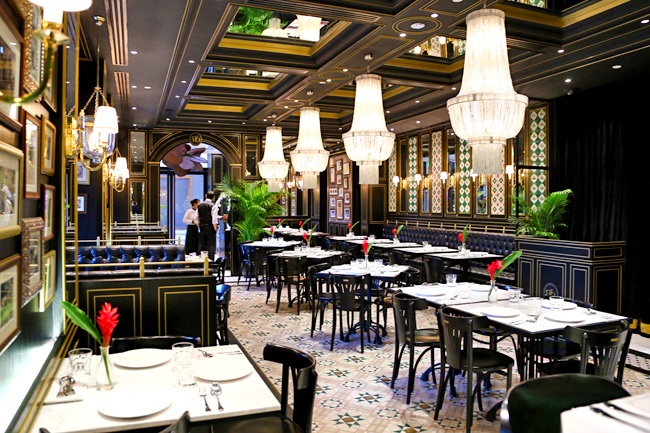 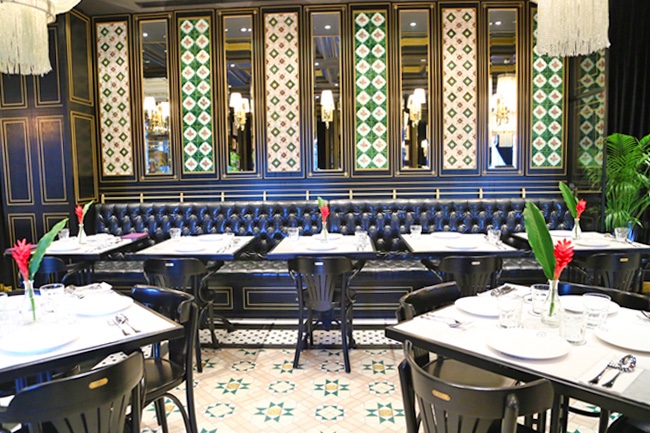 Quite simply, the decor and ambiance bowled me over. The restaurant was beautiful and stunning.

It was elegant with an old school charm and seductive opulence. 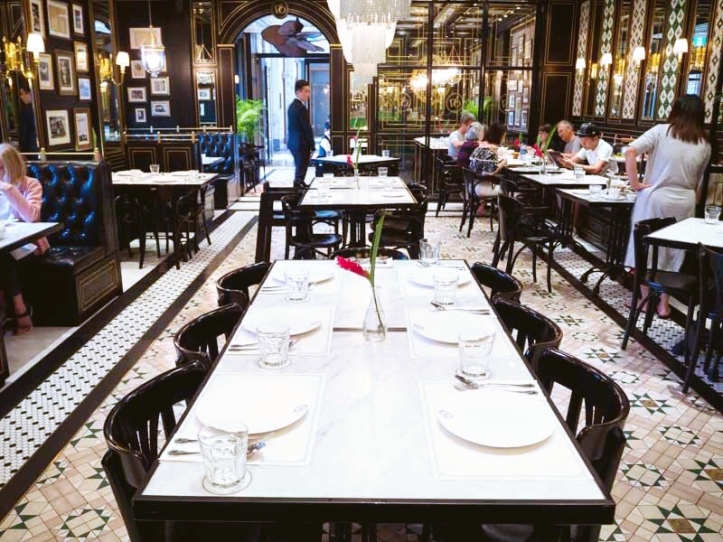 Granted, the restaurant got a little noisy when it started filling up but I can see why it would be the perfect place to bring friends particularly from out of town –  a luxuriant and opulent setting reminiscent of the colonial days from days of yore, serving food peculiar to this part of the world.

I can picture frou-frou Tai Tais with impeccable hair dos chatting and meeting for afternoon tea at this establishment to discuss the thermomix they just bought, and how their helpers absolutely loved it.

Expatriates will go nuts with this decor and call it quaint and charming.

I must confess I came with some misgivings. I had eaten at one of Violet’s restaurants years ago and came away underwhelmed.

To be fair, I don’t recall why and it was not particularly tragic or else I would remember. But I was prepared to be underwhelmed again.

So it was a pleasant surprise that I quite enjoyed the food on the whole. Sure,  it was not every dish that I loved, but overall it was positive.

I suspect that like me, some people think that her restaurant is dubbed a nonya food restaurant. So we expect every dish that comes along to be authentically nonya and when it isn’t, disappointment sets in.

The other mistake we make is what we all do with our food. We have an ingrained sense of how one dish is usually prepared, and once that dish is prepared slightly differently, our petulance and indignation takes over and we bristle with criticism.

This unwittingly happened to me at this lunch again, until I reminded myself to stop being an ass and to just enjoy the food with no preconceived notions or bias.

We associate Violet Oon with Peranakan only but the truth is that the dishes offered in her menu at National Kitchen is unabashedly a smorgasbord of the comfort foods of different cuisines in Singapore, albeit nonya dishes do take centre stage. 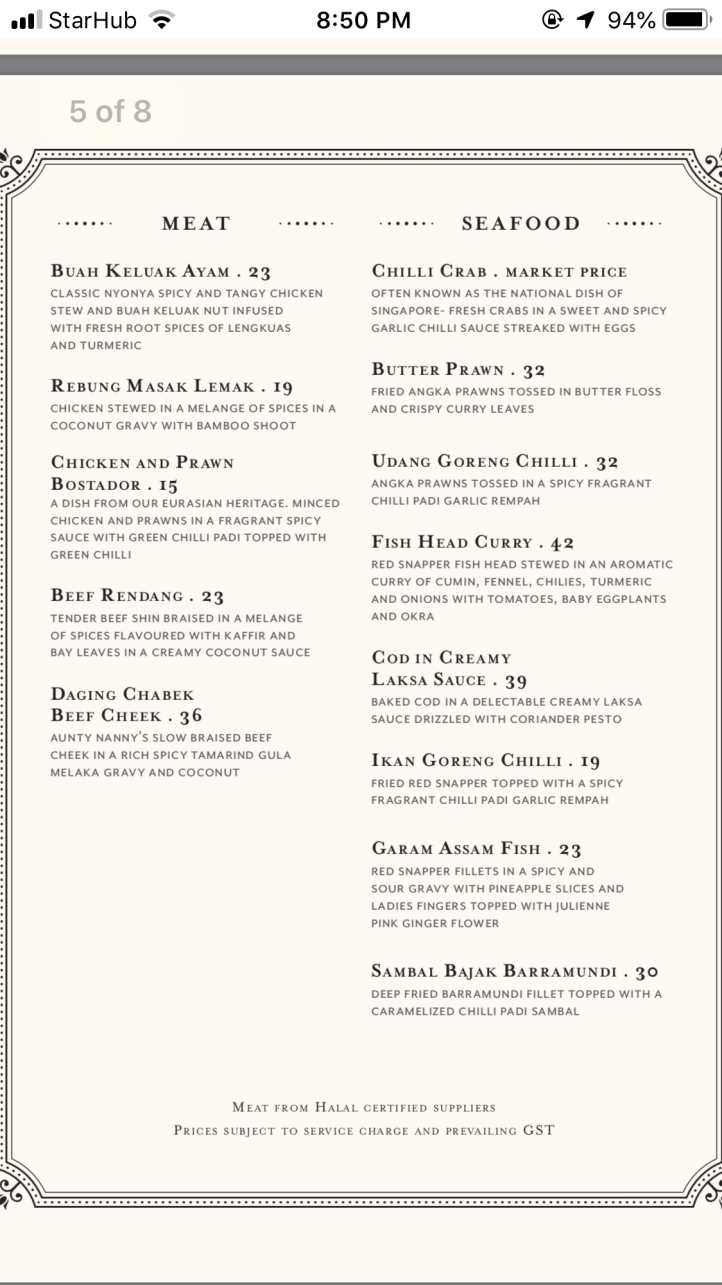 I don’t consider beef rendang to be classically nonya and when the dish arrived, I didn’t realise it but subconsciously I was comparing her dish to Indonesian style rendang when her menu doesn’t proclaim it to be so.

Similarly we ordered the chicken and prawn bostador and when it arrived, I was looking for nonya flavours until I read the menu again and realised that it was described as a Eurasian dish.

Im not very bright and around meal times, I get dimmer.

Chicken rice was offered as Hainanese chicken rice so again, that’s not nonya at all.

Duh – I figured that out Einstein.

I spied this dish ordered at the next table and liked the robust chunks and the color of the dish. So I ordered it.

We agreed it wasn’t bad but it didn’t blow me away.

I forgot to take a picture before we started, hence the remnants shown above.

Here’s a better picture of this dish 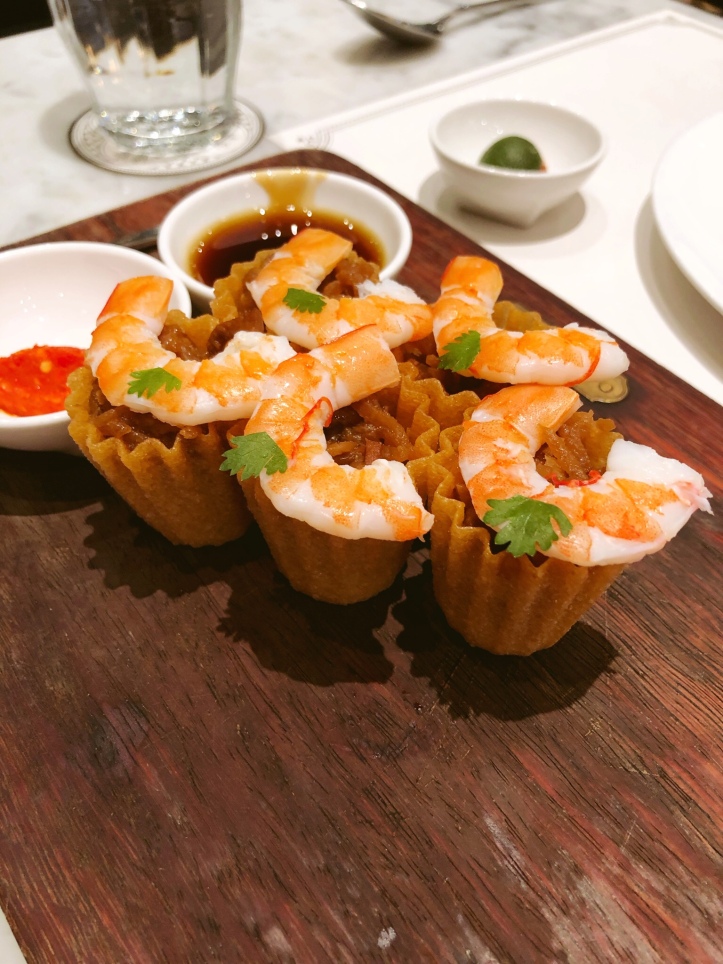 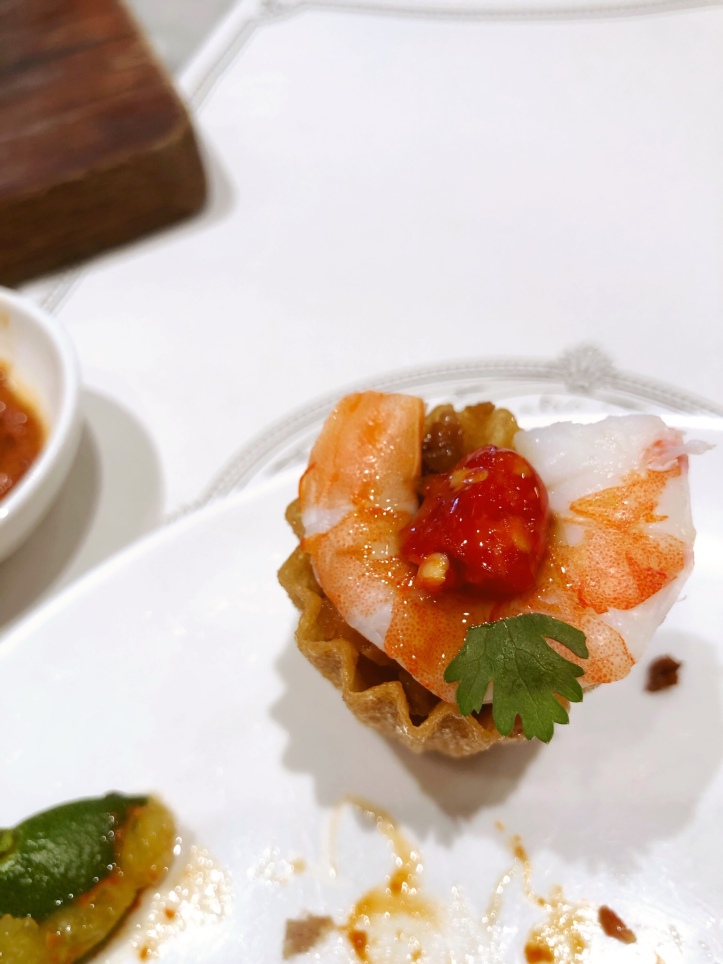 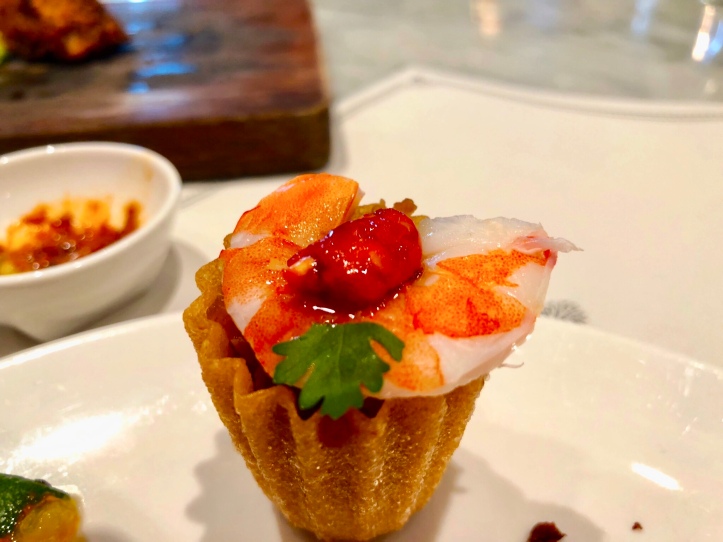 I liked this dish. The pie tee cups were nice and crispy, the prawns served with each pie tee was succulent but it was the dollop of chilli that made it special.

The chilli tasted fresh and tangy and lifted the dish considerably. 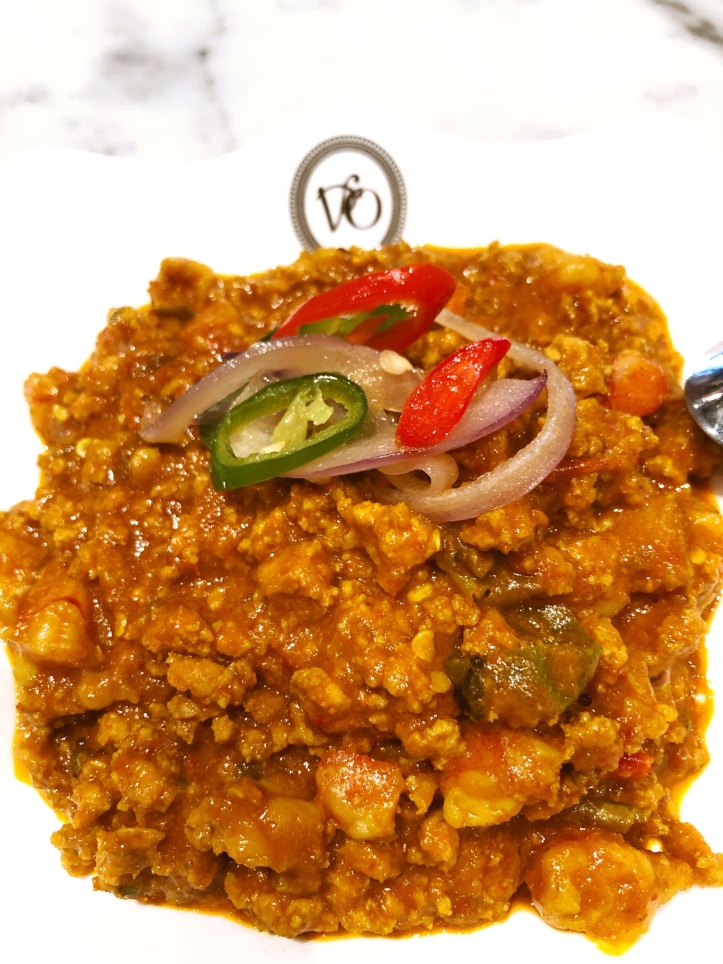 I must confess I had nothing to evaluate this dish with as this was the first time I was trying this Eurasian dish.

To be fair, perhaps it was the dish that didn’t excite me, rather than the level of cooking. It was lemak but not spicy enough for me, although perhaps that was exactly how this dish was meant to be.

This was the dish that initially disappointed me until it struck me that I was just trying to look for Indonesian style rendang like the ones you would find in Natrabu or Sederhana in Jakarta.

So the fact that the beef shin was cooked to a melt in your mouth consistency did not move me.   Like an imbecile,  I was unreasonably looking for drier darker beef with a bite like this.

So I have to give credit for the melting texture of the beef shin rendang at National Kitchen – it was exquisite.

But the brighter and sweeter style of this rendang is just not my thing. 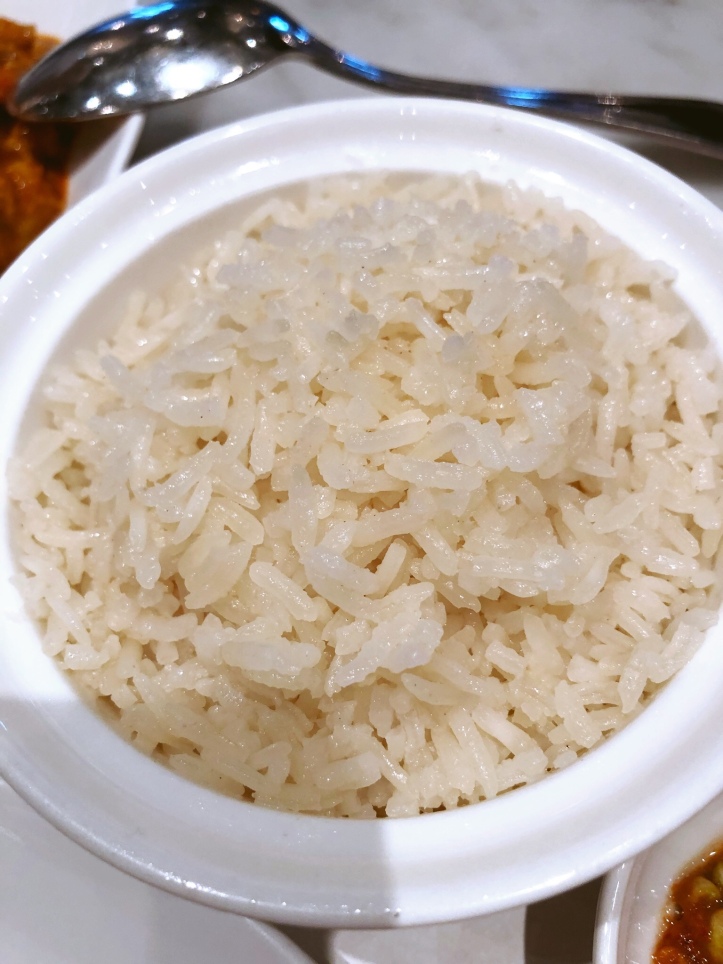 I like the fact that the restaurant serves chicken rice in a bowl (even if it was priced at $3).

The fact that they sell the rice by itself tells me something – they are proud of it.

And they should be.

I enjoyed it very much – the grains were nicely coated with oily chicken goodness but not overly so, and the perfumed waft was heavenly.

Kudos to the Chef. 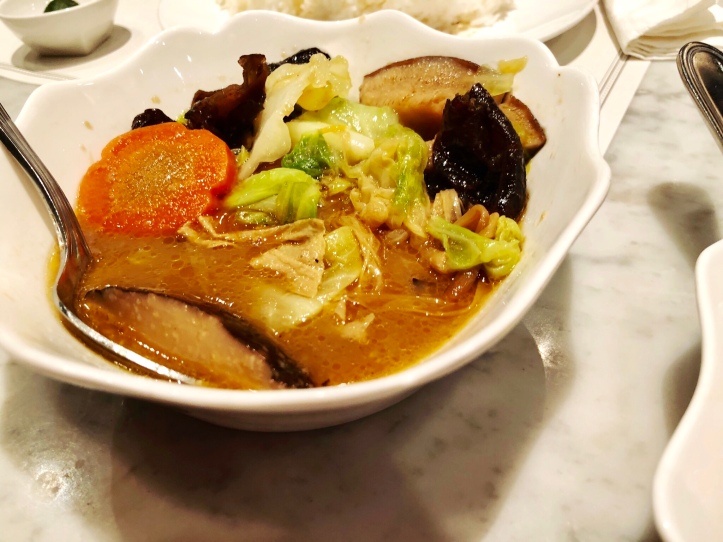 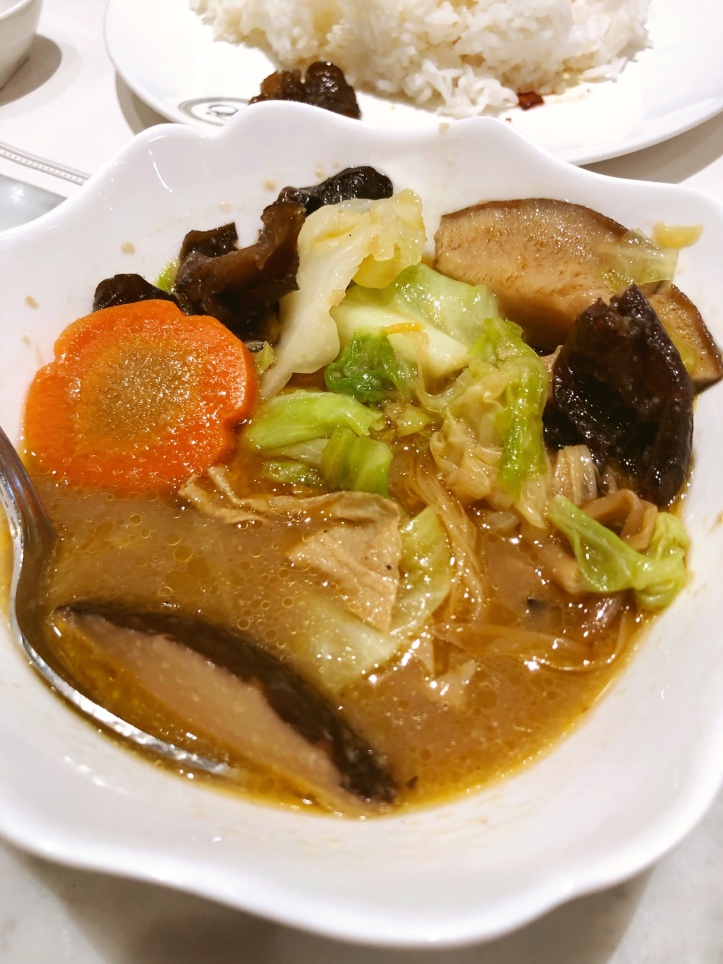 So this was the one true nonya dish that we ordered – the ubiquitous nonya vegetable dish.

And it did not disappoint. The hint of taucheo (fermented soy beans) and the sweetness of the sauce was nicely balanced.

And unlike most places that boils the vegetable to literally a limp “vegetative” state, their dish retained a nice crunch which was refreshing to say the very least.

Great execution of a simple but much loved dish.

I thought both desserts we had were delicious. 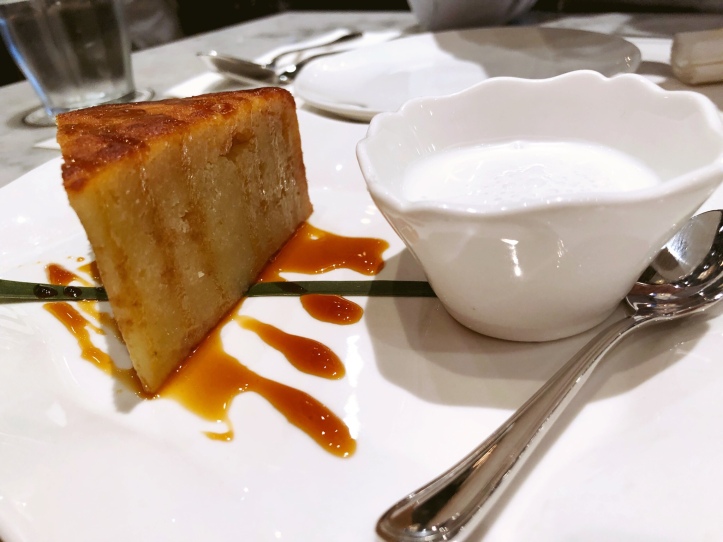 The Kueh Beng Kah was a tapioca cake that had a nice chewy texture and this blended beautifully with the syrupy gula melaka (palm sugar) and the coconut cream which was thick and gooey – just the way I like it. 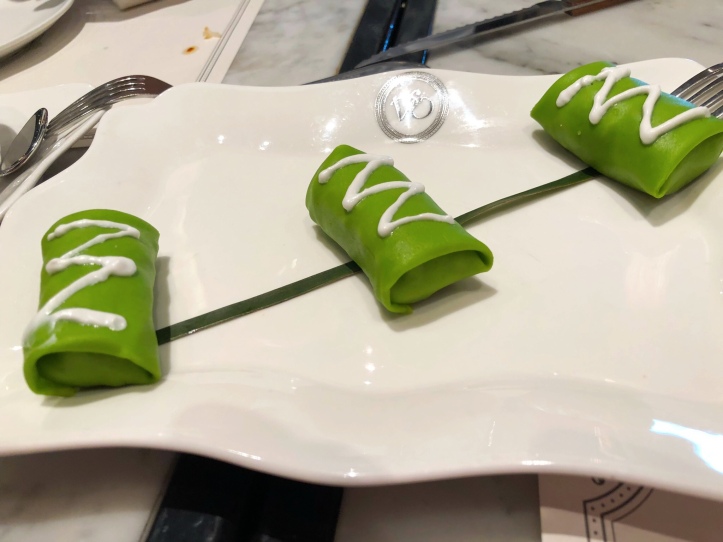 And the Kueh Da Da just hits the spot.

A fragrant pandan infused skin that had the right amount of softness and whimpering reluctance when you tore into it, hiding fragrant golden syrupy grated coconut.

This came as a very pleasant surprise.

The coffee served there was the “Kopi Tiam” sort (traditional coffees served at the traditional road side coffee shops which I absolutely love).

I don’t know how but they’ve got the blend beautifully balanced, robust and fragrant but yet a tad more refined than usual.

What a wonderful end to a meal.

I could see myself coming for high tea just because of the quality of their scrumptious desserts and coffee.

I can begin to understand why they were awarded a star by Michelin.

The ambiance was great and it was a truly beautiful restaurant.

The service I have to say was also of a sufficiently high standard. The wait staff was attentive and polished at the table.

Perhaps the only fly in the ointment so to speak (there were no flies) was why they didn’t change our plates after the starters, when our plates were clearly badly smeared as you can see from this picture

Well I must say I came with a slightly closed mind and came away more enlightened, almost pleased.

There were gems and I am always particularly impressed when someone does the simple vegetable well.

But one swallow does not a summer make.

I think I will keep an open verdict in my mind on the star, and whether they are indeed a National treasure.

But they’re not far away.

From deserving that star.

Or from civilization too.