I have been a fan of New Ubin Seafood since its early days situated in an industrial car workshop estate in Sin Ming, so anything I write will invariably and unashamedly be somewhat of a homage.

Indeed, whenever any friends from overseas ask me for recommendations on what I think is some of the best food in Singapore,  I have had no hesitation in sending them to New Ubin.

And my overseas friends have raved and raved for years and have become stalwarts of this institution.

What sets New Ubin apart from other seafood restaurants is, I think, the very critical eye which Mr Pang Seng Meng, the owner,  has over his restaurants.  Mr Pang hosts many dinners at his restaurants with his steady stream of army buddies, school buddies from his alma mater Anglo Chinese school, friends and family.  Many of his dining buddies are stalwarts of industries, successful businessmen and people in the upper echelon of society,  and they no doubt have very critical tastebuds and unrelenting standards of fine dining.

I have personally seen some of the wines and whiskies at the next table while dining there, and some of those uplifting spirits belong more in a high end fine dining michelin restaurant, than in a  simple establishment in a motor industrial estate.  Of course New Ubin has now relocated to much nicer premises, particularly with their latest opening in Chijmes.

I think the success of a restaurant is guaranteed when a very critical boss who goes into the kitchen incessantly and moves around to talk to his customers, dines at his own restaurant frequently, and cannot afford to disappoint his friends and loyal customers.

And I have personally witnessed Mr Pang send back dishes he is not happy with, and storming off into the kitchen.

Where the customer most difficult to please is the boss himself. And that customer is in the establishment all the time.

This, I think, is the magic formula for New Ubin.

Method to the Madness

The other unique feature of New Ubin is their audacity to offer hitherto unthinkable fusion of cuisines – fusing the much loved Italian classic carbonara with smoked pork belly, our much loved coffee shop half boiled eggs are introduced to mr foie gras and mr truffle oil, the scary durian (for expatriates) is offered as a cheeky creme brulee.

Where in the world does one find one of the most well grilled USDA “Choice” Black Angus Ribeye beef served with Idaho potatoes, its drippings collected and fried in rice with french butter,  German deep fried pork knuckle, top end Spanish Caraberino prawns served sashimi style, and molten chocolate lava cake in a local seafood restaurant?

I suspect all the playful haute cuisine that has crept into the menu could have been the input of Mr Pang’s son Alex, who was a practising lawyer over the years dabbling and helping out in the restaurant in his spare time and sabbatical time-outs, but have now joined the family business full time.

And yet when one laments about missing a good quality old fashioned fried Hokkien mee, and a black sauce KL style noodle, its right there on their menu, alongside chicken and mutton satay.

And wait for it – just when you think the madness stops there, there’s baked curry chicken pie and mutton masala indian style.

And yet there is a method to the madness.  There has to be – because every dish I mentioned above which I have tried many many times over the years at New Ubin have all been above average, even compared to other establishments specialising in that cuisine.

And many of the dishes are just the best you can find in Singapore.

The most popular dish in a Seafood Restaurant

You will be forgiven if you move around the tables at New Ubin on a busy Saturday dinner, and think that Black Angus Beef was being given away for a song, because every other table has that dish.

Well, the reason for that is that people come to New Ubin craving to try their grilled Black Angus USDA Ribeye for the first time, or for die hards like me, wanting to clog my arteries with their fried rice fried with french butter and the drippings of USDA ribeye.

Appropriately, that dish is called “heart attack fried rice” and is only served when you order the Angus Ribeye.  And believe me, it will be like nothing you have ever tried.

You will probably meet your cardiologist there – remember to wave.

And the meat?  Well I have two words for you – Beef that is cut two inches thick so that you could char it on the outside and have the inside pink as a baby’s bottom.  And Charcoal grilled for that smoky madness.  Go figure.

So this is how seriously  they take that one dish when they explain it to you in their menu : 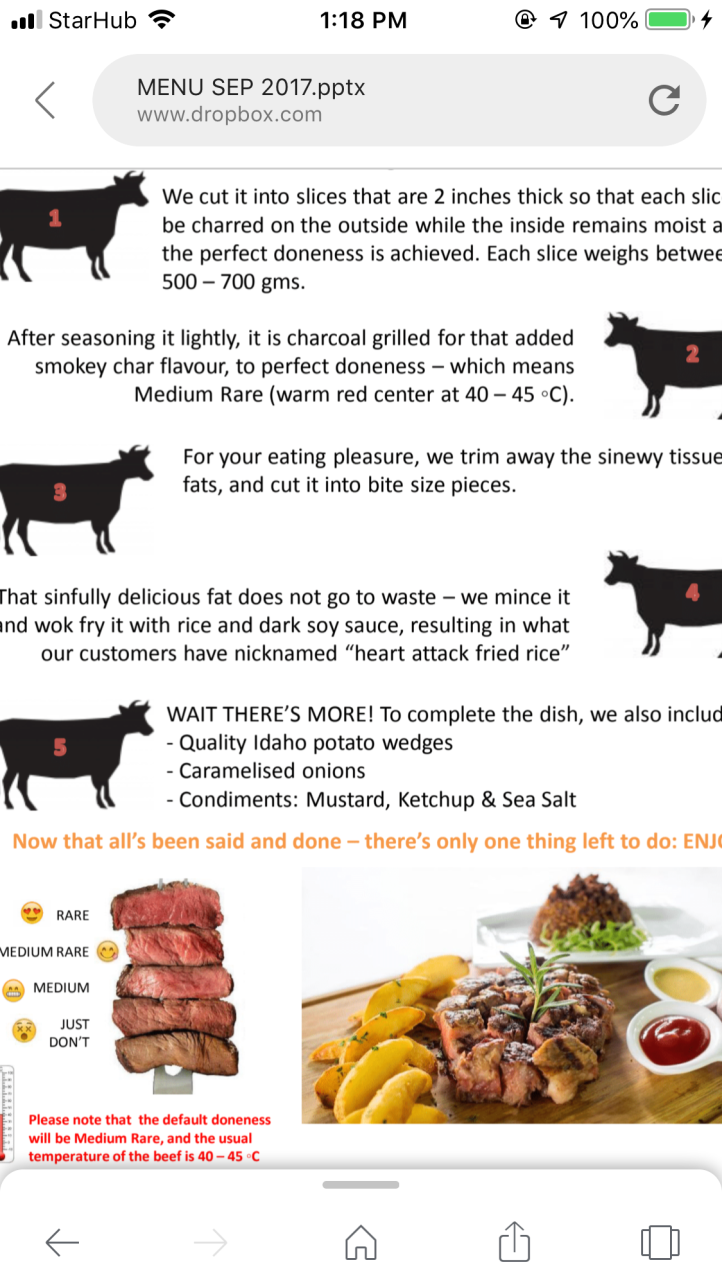 We had colleagues from overseas in town, so a bunch of singapore colleagues and I decided to host them in New Ubin.

My objective was to order most things they have not tried.

We were lucky to be given a room for our booking.

Our server showed us this hip futuristic Fitbit watch he was wearing and this small little wooden token he placed on the table.

He could be summoned just by us placing the token upright, and we could even indicate we needed more water, the bill or just for the next dish to be served. 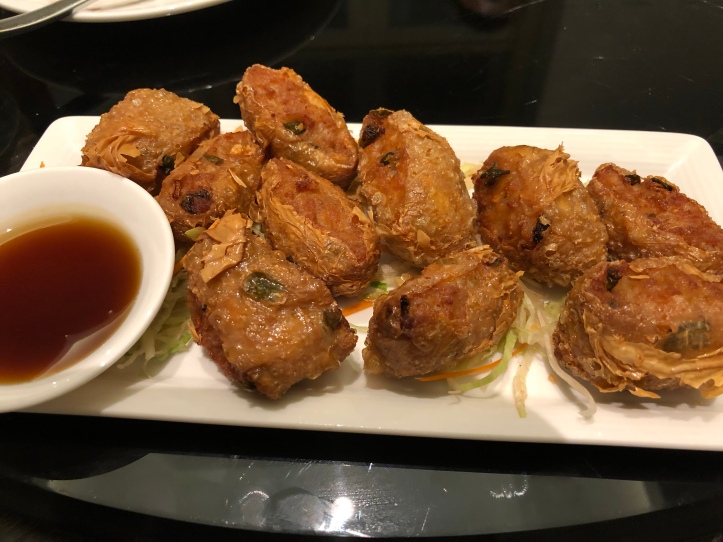 The crunch was amazing. The fillings were succulent and sweet.

Why order this staple and hardly unique Cze Char dish in a seafood restaurant ?

I did it for one simple but highly complex reason.

And no regrets – it was crispy and downright delicious. A beautiful savoury appetiser.

Half Boiled egg with Foie Gras and truffle oil 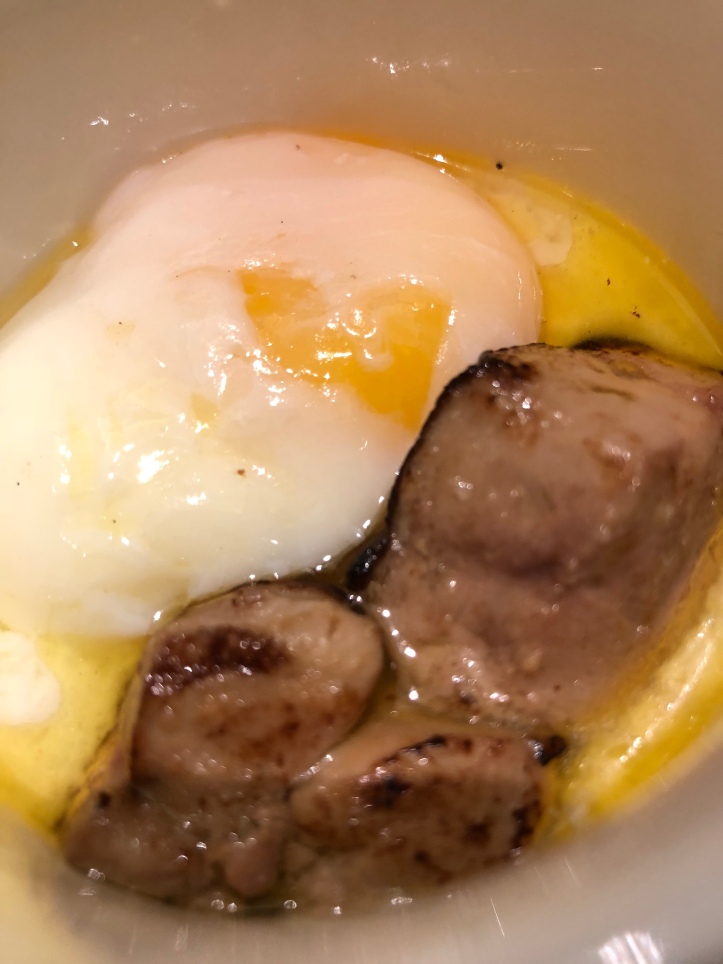 I tried to sound nonchalant and dismissive so that we wouldn’t end up ordering this, but I was met with a chorus of decisive yeses when someone suggested this dish.

It was decadent and tasted divine as always.

I shed a silent tear for the goose who accommodated us. 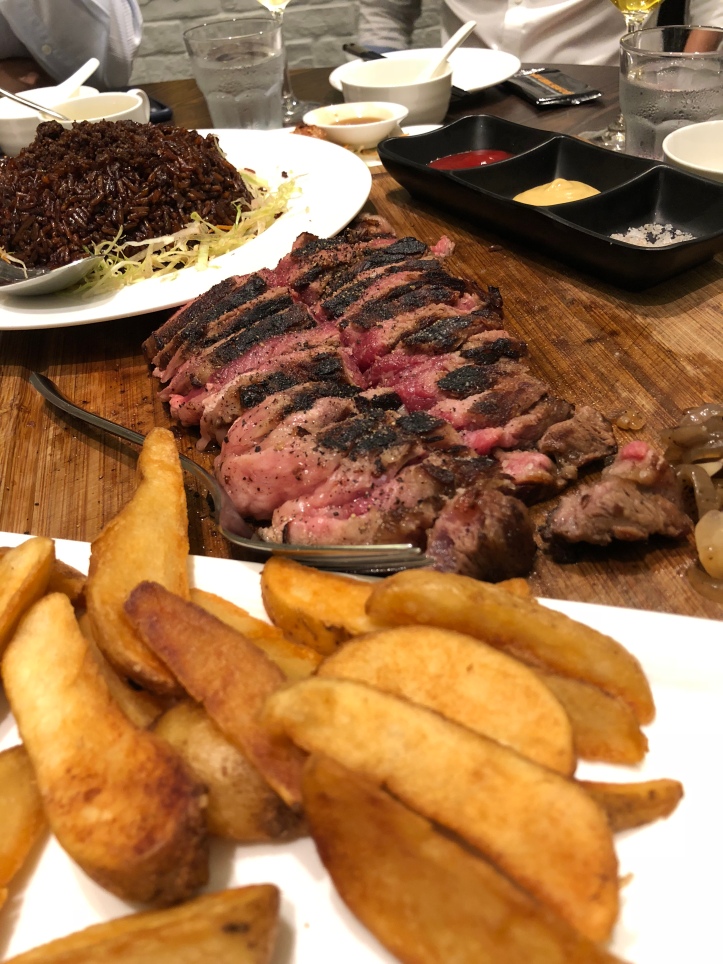 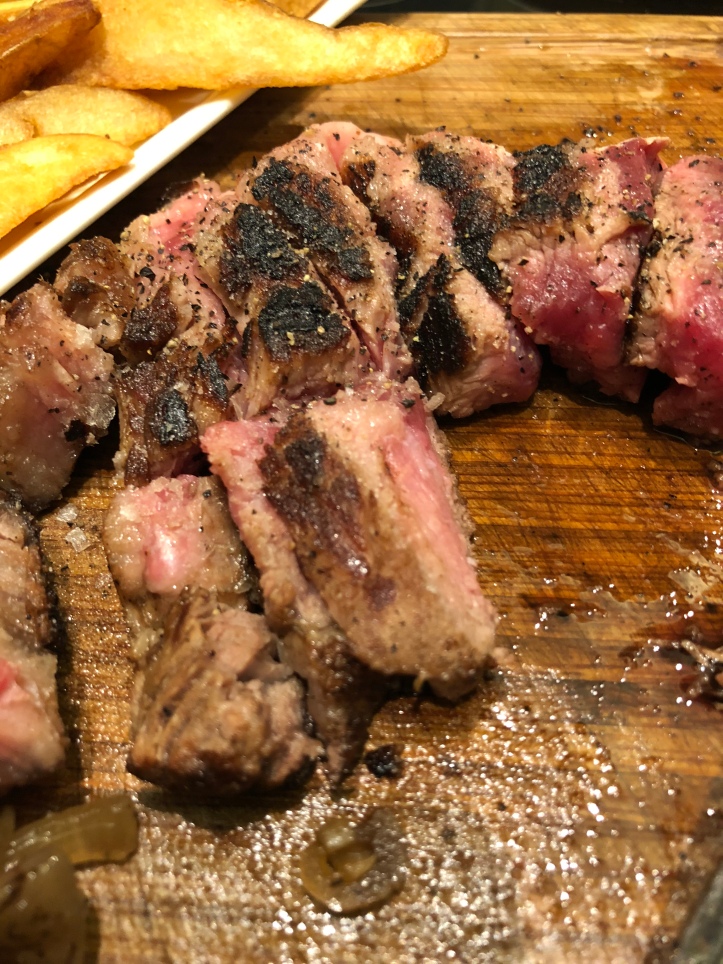 I was met with hostile stares and expressions of disbelief when I contemplated skipping this.

And boy was I glad I ordered it.

The texture of the beef was even softer than I remembered it to be and that smoky char taste is very very close to manna in heaven, and I feel most close to God when he lets me have this dish. 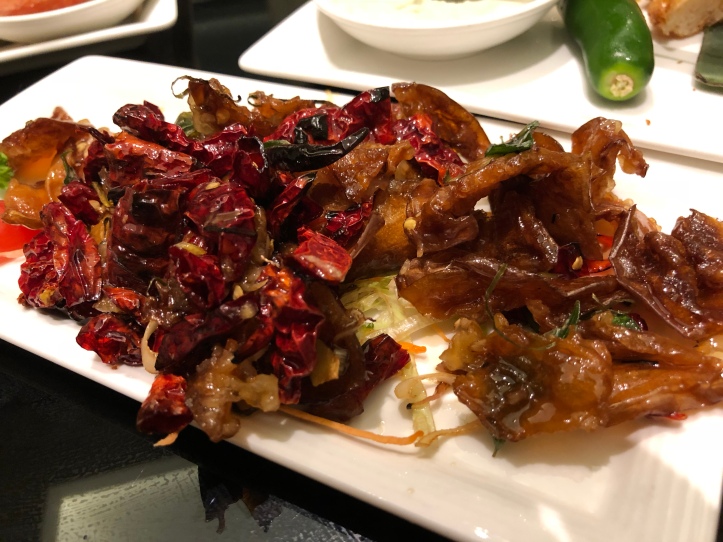 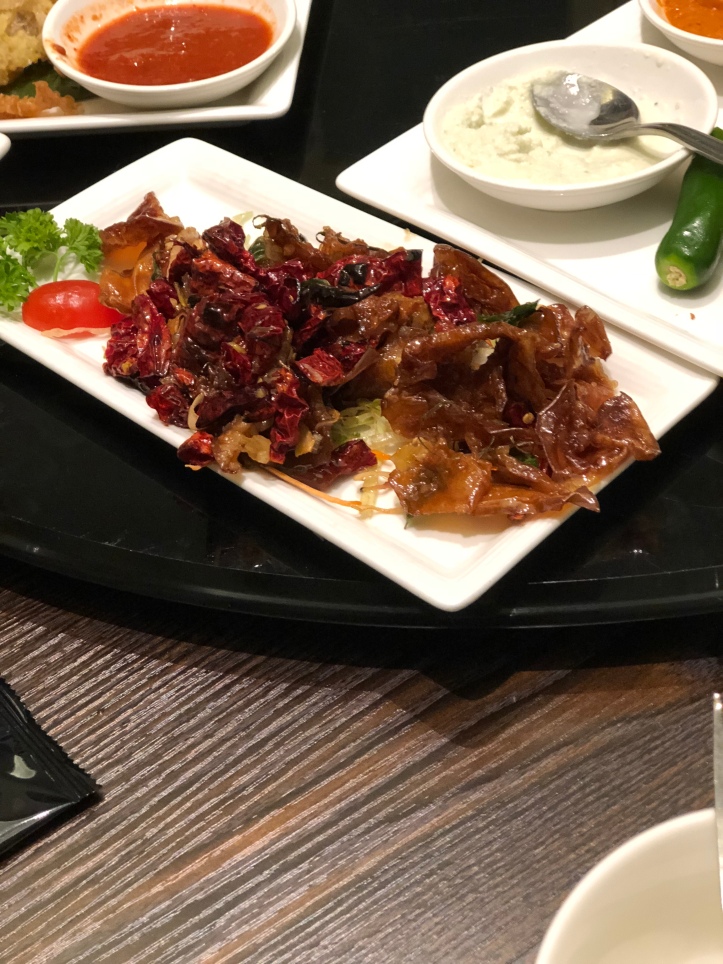 They do other vegetable dishes well but in the spirit of trying new things, I chanced upon this dish.

It was quite delicious, as much as any vegetable dish can be.

The mark of a good Hokkien mee is in the sauce – the rich gooey goodness brought on by a rich broth extracted from the juice of prawn heads and pork bones boiled for hours on end . New ubin upped the ante with the addition of clams which made that broth to die for.

Oh and let’s not forget the crispy pork lard. That was just so sinful and wrong in so many decadent ways.

Many of my fellow diners waxed lyrical about this dish.

But there can’t be all winners the whole evening.

I’m going to keep an open verdict on this dish. It was good but it didn’t blow me away.

Our friendly server for the evening whispered to me conspiratorially that Big Boss Mr Pang wanted me to know that he had Akagai that evening and it was seasonal only. He suggested slicing it up and frying a char kway teow with it.

My slitty eyes opened up with intrigue. He had me at Akagai and sealed me at char kway teow. I have never heard of this, let alone try this dish at New Ubin or anywhere else for that matter. With Akagai that is.

The dish arrived and it was sensational. The beautifully pink Akagai had a nice rubbery texture and the char kway teow was similar to Penang style char kway teow. It was perfumed seductively with the smell of “wok hei” or the “breath of the wok”.

Quite a work of art. It looked great and it tasted divine. 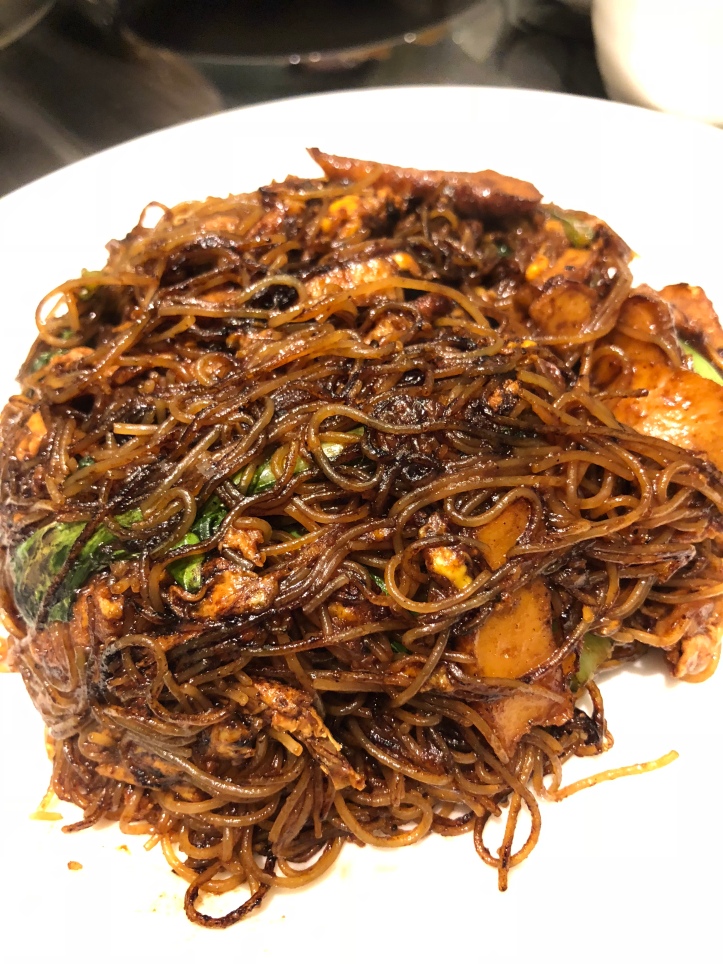 I decided that the evening will not be complete without having their renowned dish very aptly called the Boss’s Bee Hoon.

The name says it all. If the boss approves of this Bee Hoon, it damn well will be approved by all of us.

This is in fact my favourite carbo dish at New Ubin, and very possibly the best fried bee Hoon I have had anywhere.

The dish came and reminded me that it is without doubt the number one carbo dish on the menu.

Of Cheese and Bananas

Mr Pang had kindly sauntered in to ask how we were getting on with our meal.

We thanked him for the wonderful meal and suggested he picked the desserts for us. 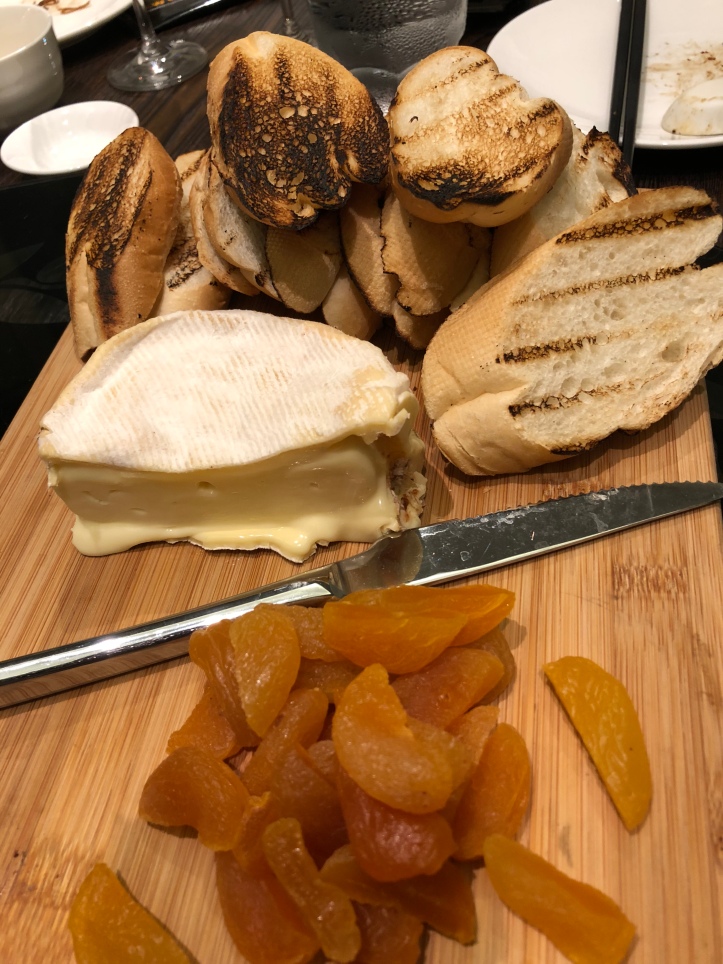 The first dessert he picked for us was this delicious cheese the Mont D’or Vacherin, a delightful cow milk cheese which has been described as “the holy grail of raw milk cheeses”.

The cheese was sensuously oozing and tasted velvety and buttery but not overwhelmingly so. The charcoal grilled baguette it was served with added a hint of charred smokiness and the combination, together with the sweetness of the apricots served with it, was truly a special experience. 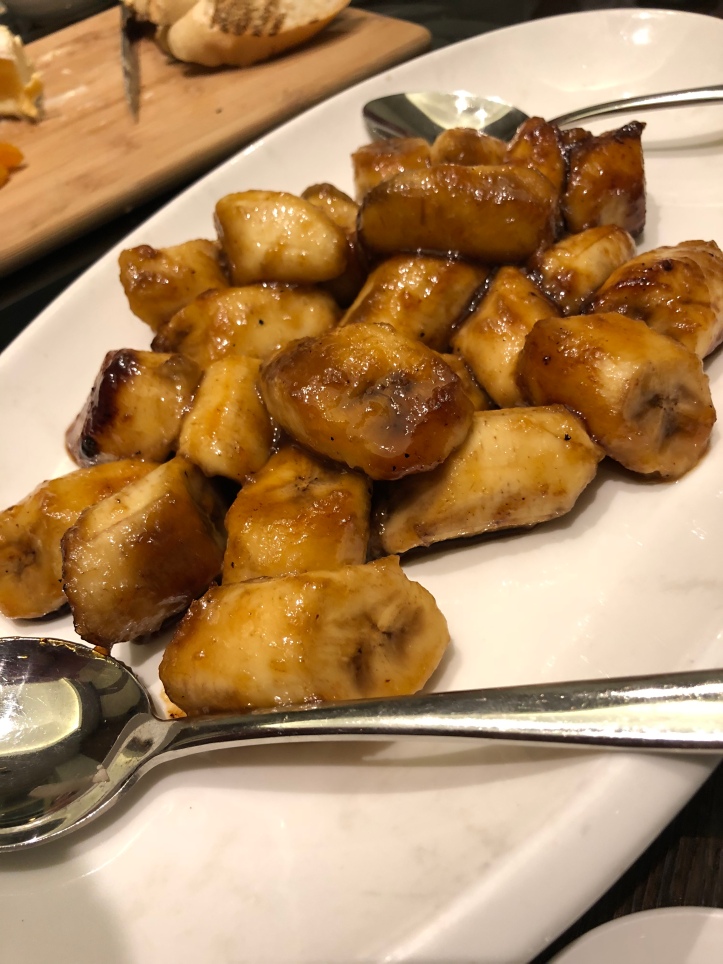 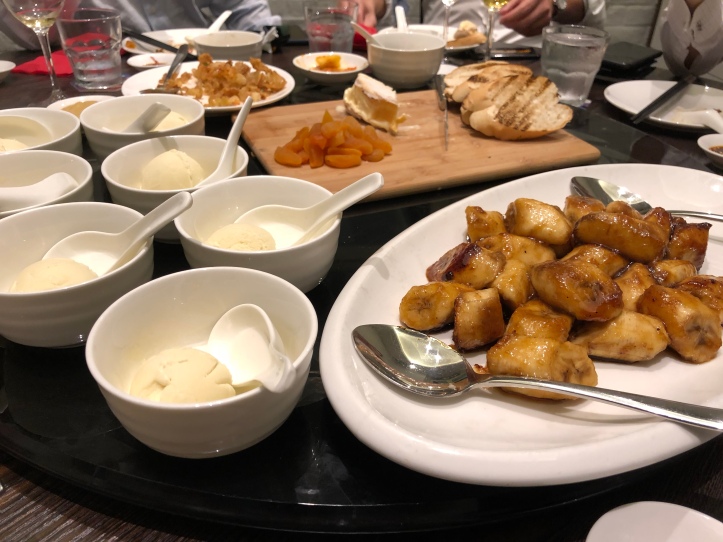 We thought nothing could top this for the evening until the bananas arrived coated with a rich Gula Melaka coating, and accompanied with bowls of home made coconut ice cream.

This was when boss man added some playful drama by his theatrical infusion of rum into the bananas and flambeing it with gusto. 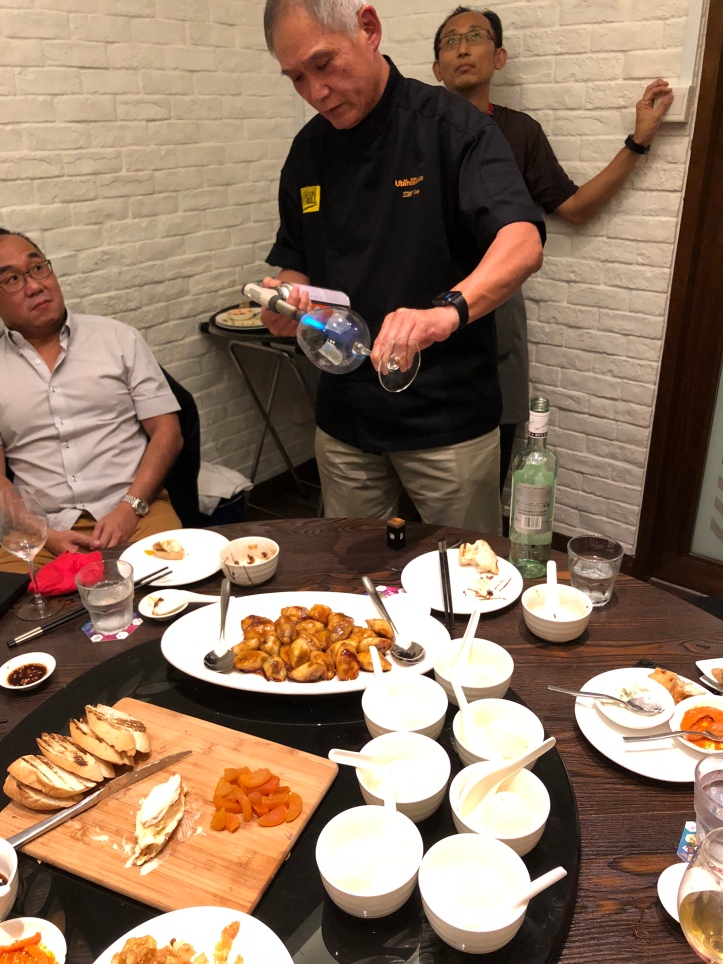 The flambé bananas were delicious with that slightly lingering pleasant alcohol after taste, and the Gula Melaka and coconut ice cream blended beautifully.

The home made coconut ice cream was particularly good.

But happy. As many clams.

Oh and for those of you still not convinced – don’t take it from me.

New Ubin has been listed in the Michelin Bib Gourmand for the last 2 consecutive years.