I have always wanted to try this restaurant that is touted to be a contender for the best fried chicken in Bangkok. I finally had a chance to try it out with a couple of colleagues when we had a firm retreat in Bangkok.

Situated along Wireless Road, it would be a 15-20 minute walk from Central Embassy on Sukhumvit or Lumphini station.

The restaurant gets its name as it is near the Polo Football Park. 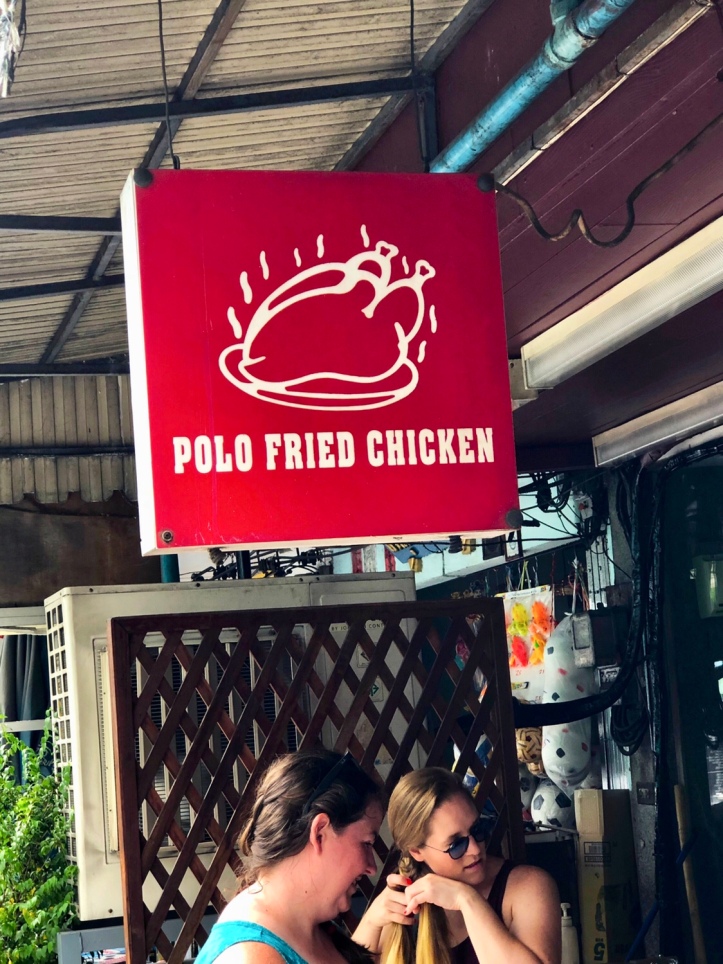 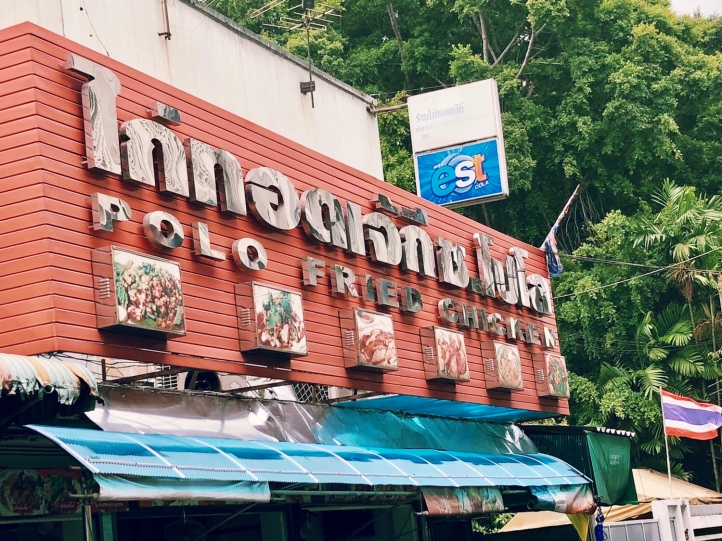 This restaurant has two shop locations about 4-5 shops apart. The bigger shop you see above is not air-conditioned and it also situates their central kitchen. If you want air-conditioned comfort, move 4-5 shops down and you will see a smaller shop with a small “Polo fried chicken” sign.

When we arrived close to 1pm, the lunch crowd was still buzzing and we had to wait for a table.

We did the obligatory selfie and not before long, we were ushered to a table.

Although everyone comes for their famous crispy fried chicken, this restaurant has an extensive menu serving all sorts of meat, seafood, vegetables etc. 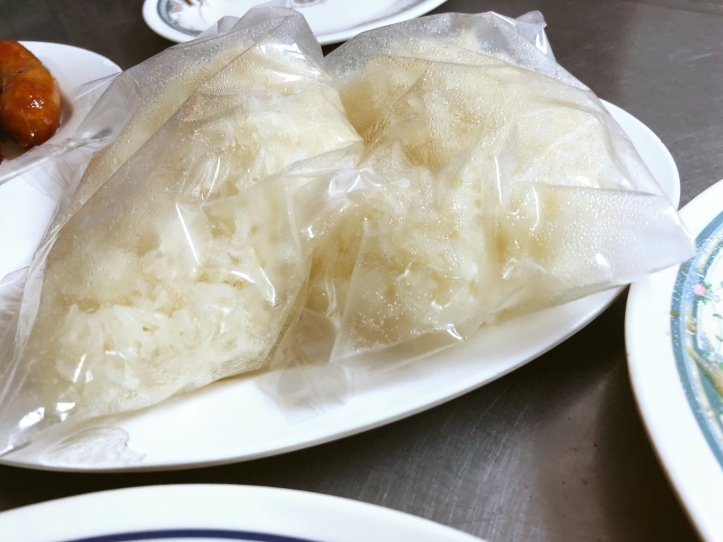 I suspect the owner is probably northern Thai as most of the dishes seems to be of that style and variety. The sticky rice they served was also a dead giveaway as I understand that is a staple of northern Thai cuisine.

We ordered 5 to 6 dishes and it was not too long before our food arrived. This was probably because a few large groups had already finished lunch and were trickling out. 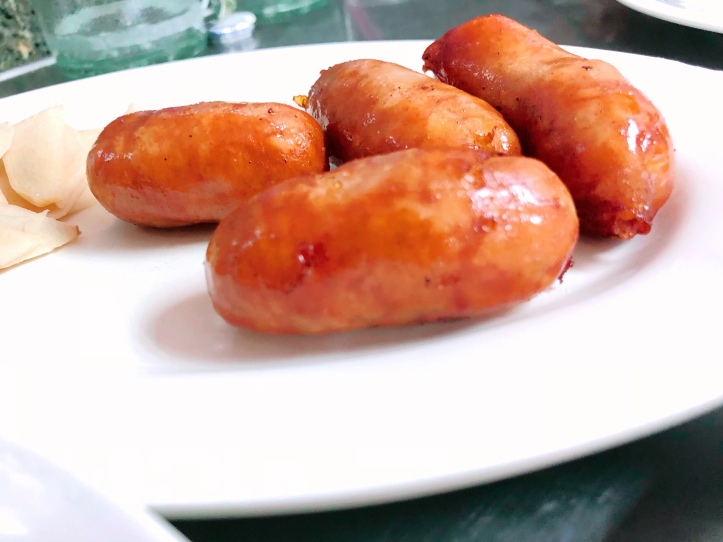 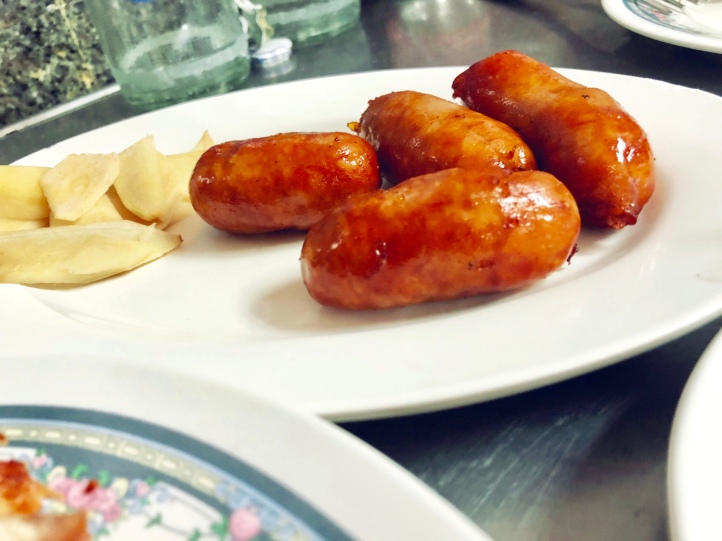 The Issan sausages were the first to arrive. They were served with thinly sliced ginger slices and birds eye chilli on the side which I thought was a rather unusual combination.

The sausages were tasty enough and the ginger slices didn’t seem to add anything to the equation.

The birds eye chilli ? Weird I thought. How does the burn accentuate the taste of the sausages? 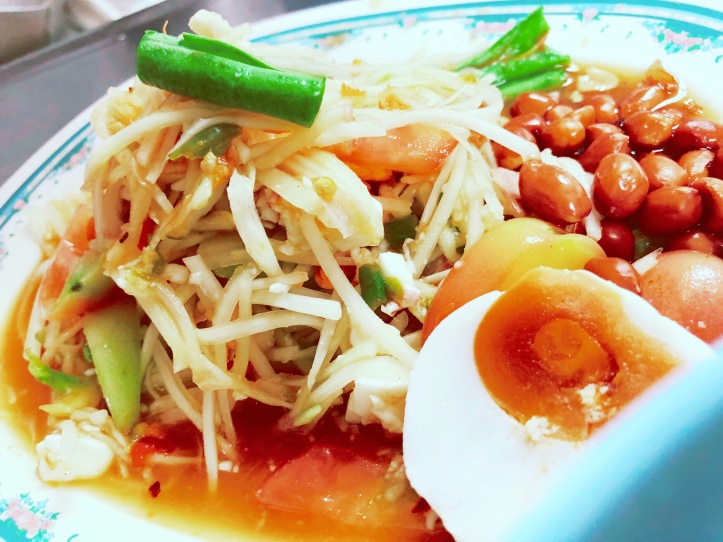 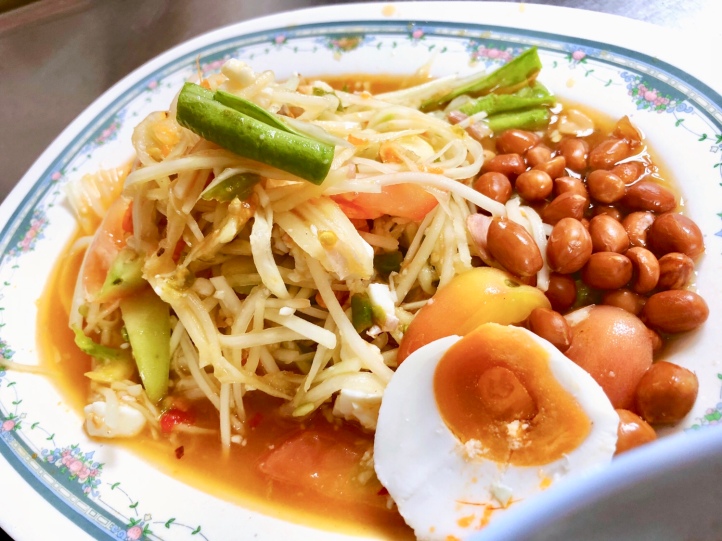 I am ok with Som Tam (pickled thinly shredded papaya) generally but I can’t profess to be a big fan. My colleague ordered the Som Tam with salted egg which was interesting so I tried some.

The shredded papaya tasted fresh and the lime juice vinaigrette it was dressed in was out of this world! It was truly the best Som Tam I have had for a long time. The salted egg and roasted peanuts on the side added a nice salty crunch. Very satisfying. 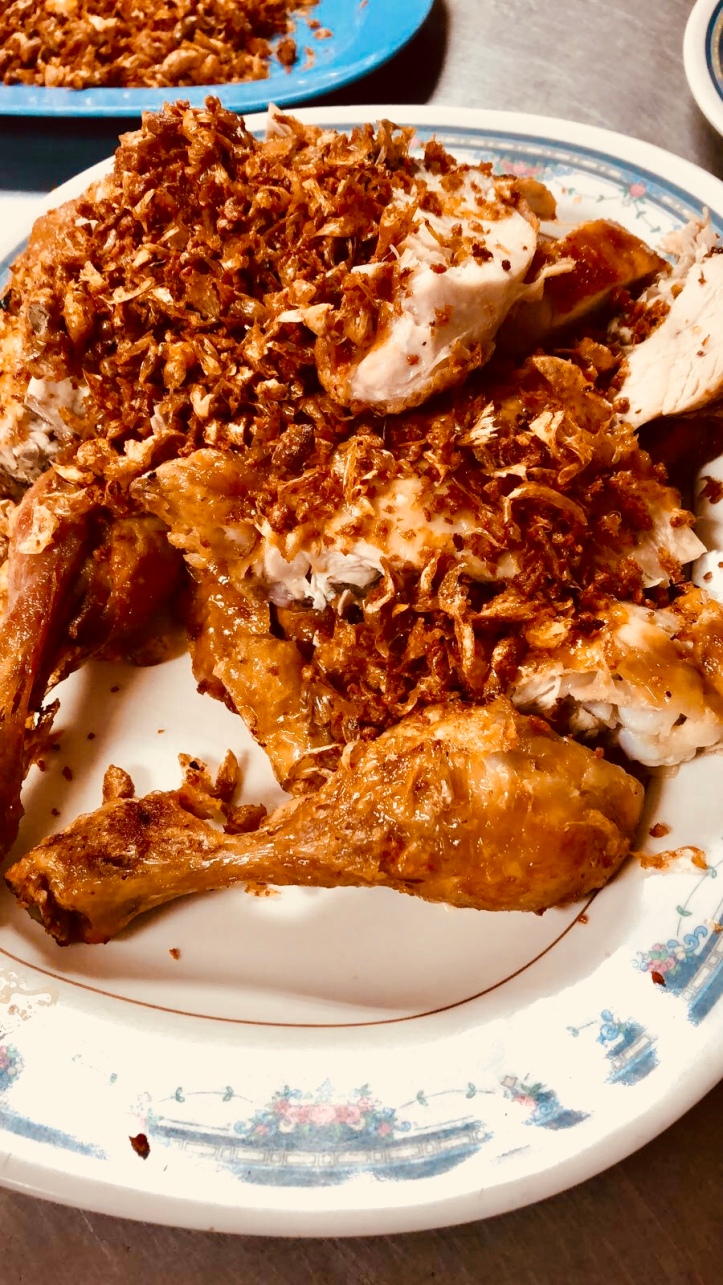 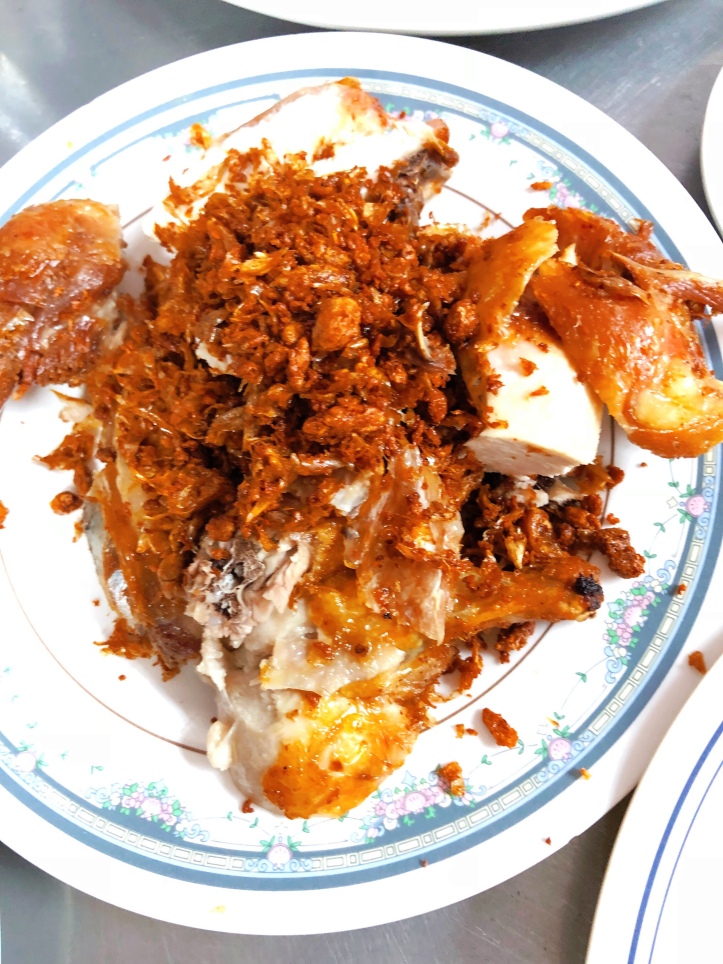 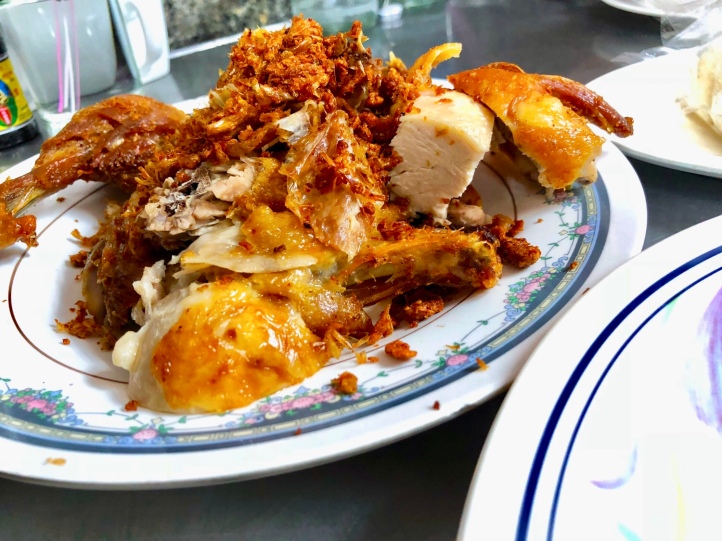 The piece de resistance arrived. I paused to take in the sights. It was visually so attractive. The skin of the chicken glistened proudly and I was mesmerised by the mountain of reddish garlic it was enveloped in.

The first mouthful did not disappoint. The waft of the garlic teased the senses and the crunch and subsequent never ending crackling was sensational. I tasted the skin and it was well seasoned and mouth watering.

I could hear that my colleagues were echoing signs of approval and happiness. 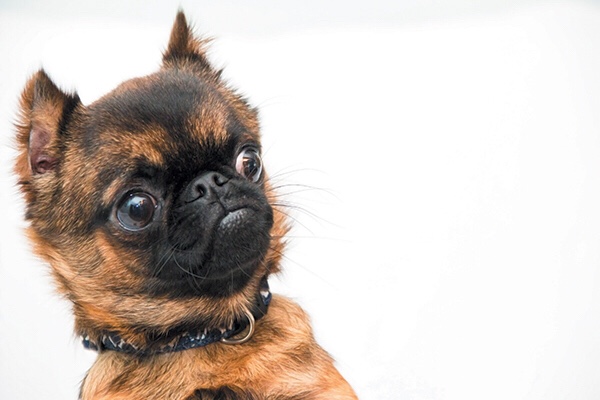 Very quickly, I realised that my enjoyment of the dish started to wane almost instantaneously.

I wanted to be sure and tried another piece of brown meat. It confirmed my fear. 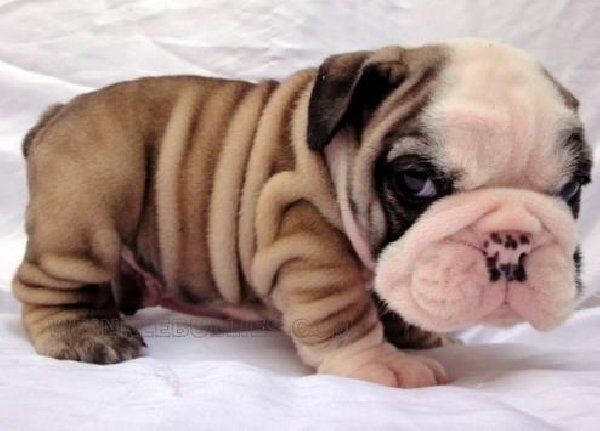 I put another piece of chicken on my plate, piled it high with the fried garlic pieces and trickled some chilli sauce over. Didn’t help – the initial mouthful of skin, crispy garlic and chilli was joyous, then the killjoy came. Cold chewy dry chicken.

I felt anguished and disturbed like batman felt upon discovering that Robin was a little gay. All that potential and all that wasted time.

This chicken dish came so close to being great. 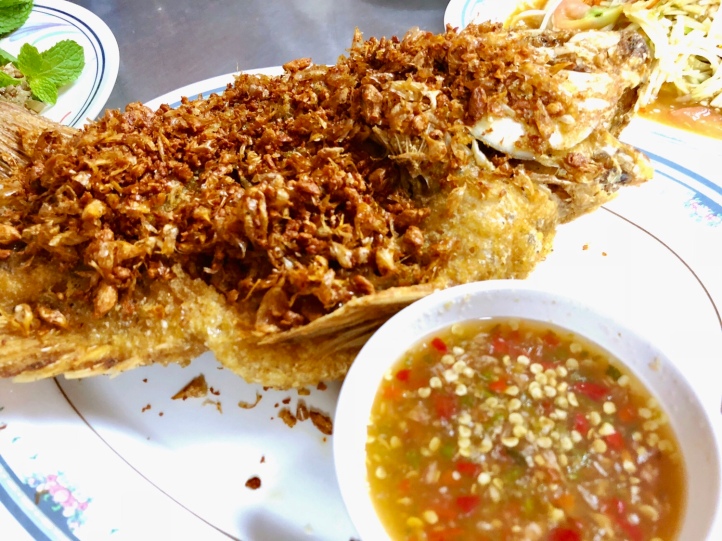 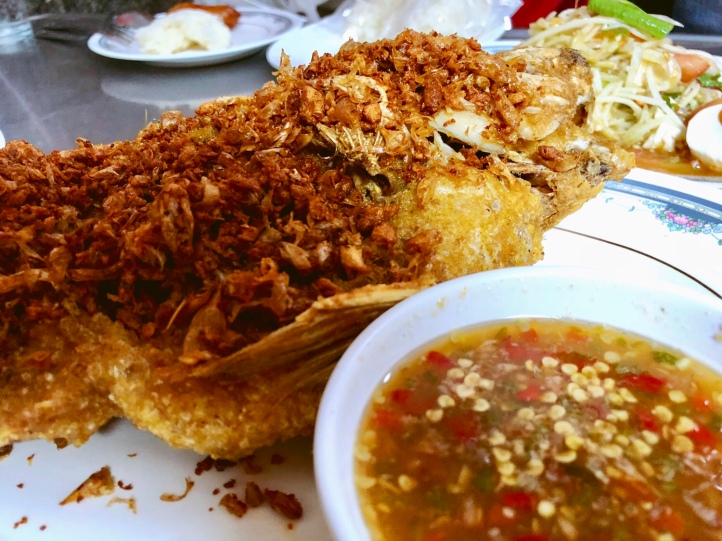 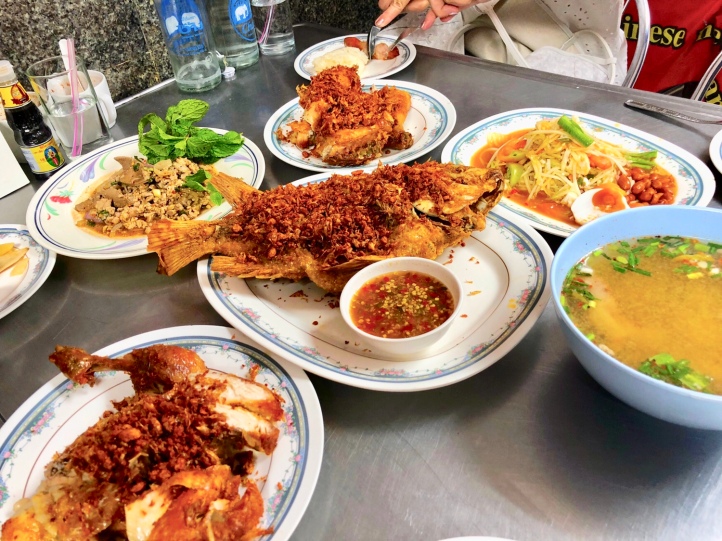 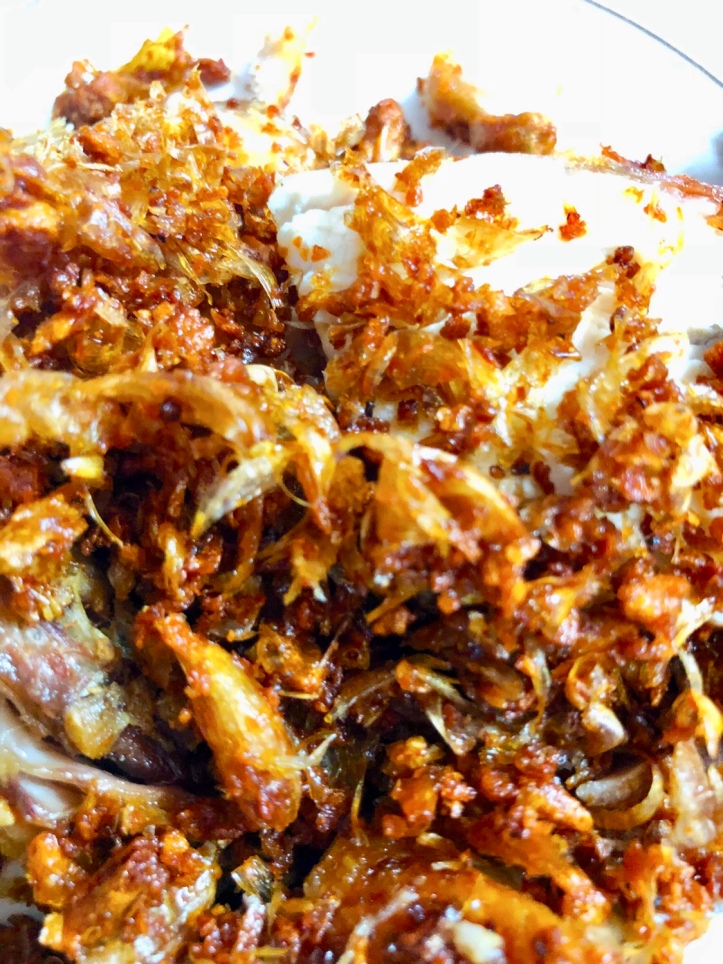 This is a close up of the amazing garlic bits. Promising all kinds of Manna Heaven.

But it could do nothing by itself.

It was Batman without Robin, Key without Peele, a manic depressed artist without his muse.

It was Romeo missing Juliet:

A lovestruck Romeo sang the streets of serenade

Laying everybody low with a love song that he made

Finds a streetlight, steps out of the shade

Says something like, “You and me, babe, how about it?”

This Bulldog was close to tears. 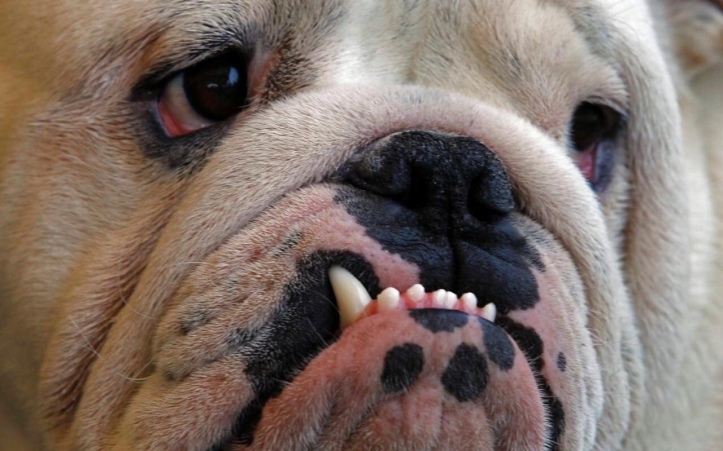 But life went on. I digress. 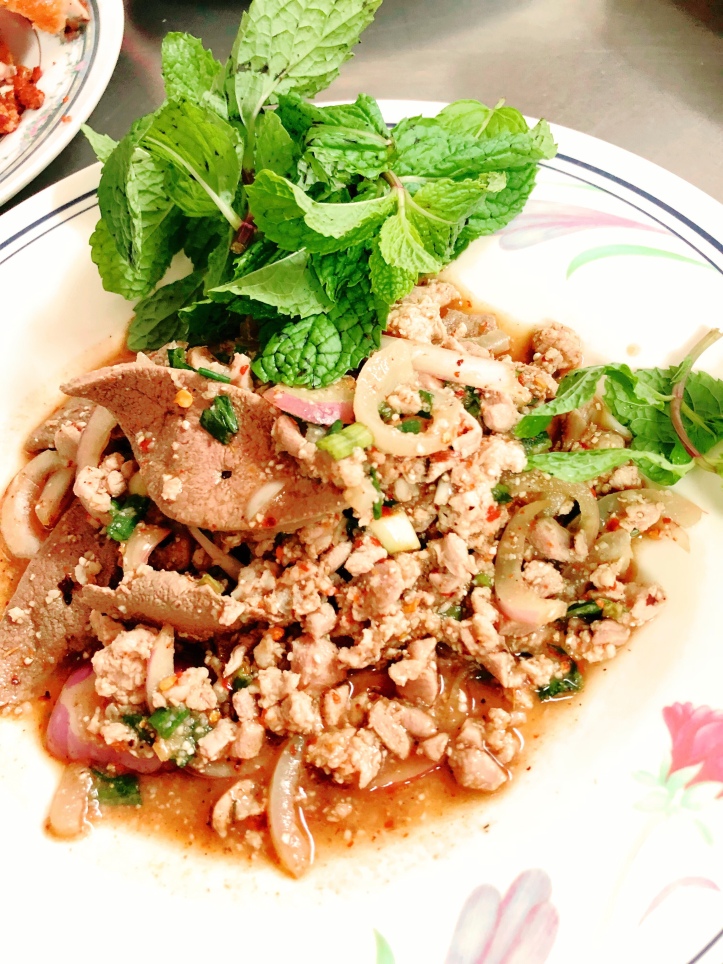 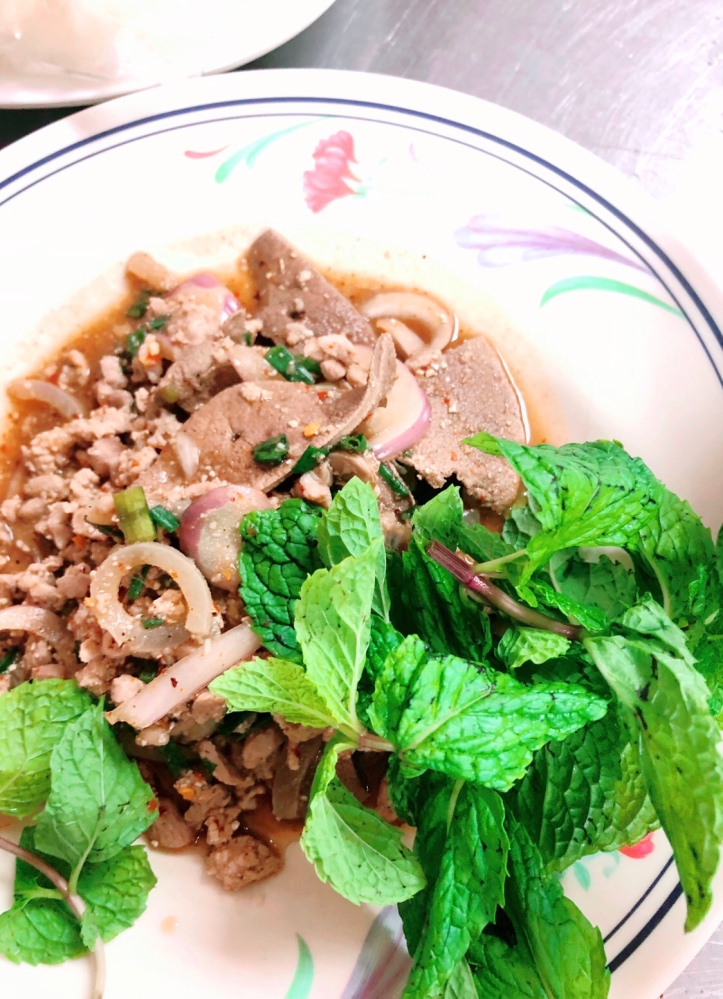 We ordered larb which is a minced meat dish native to the Laotian community and also northern Thai Isaan cuisine.

It came swimming in chopped onions, garlic and shallots, basil and mint. The bunch of mint leaves adorning the plate was a nice touch, and munching the leaves just lightened the taste of the whole dish.

The liver we ordered in it was utterly delicious- soft, powdery and almost creamy. The spices and heat were just perfect. 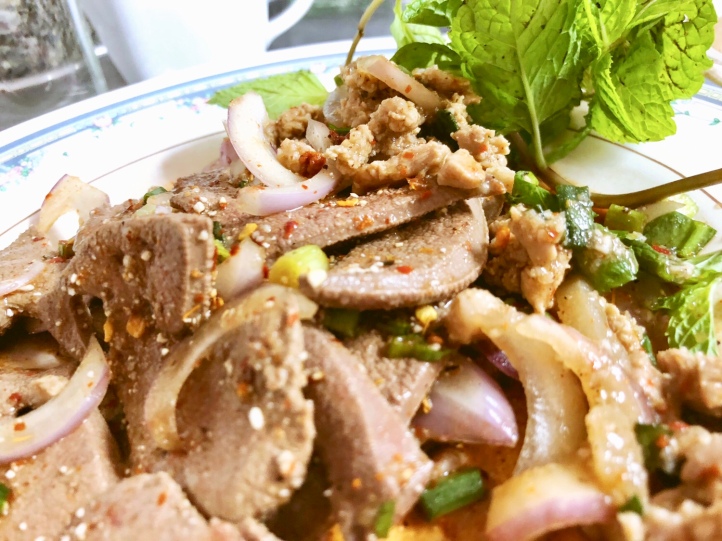 It was so yummy we ordered another one of the same, but this time with just liver alone. 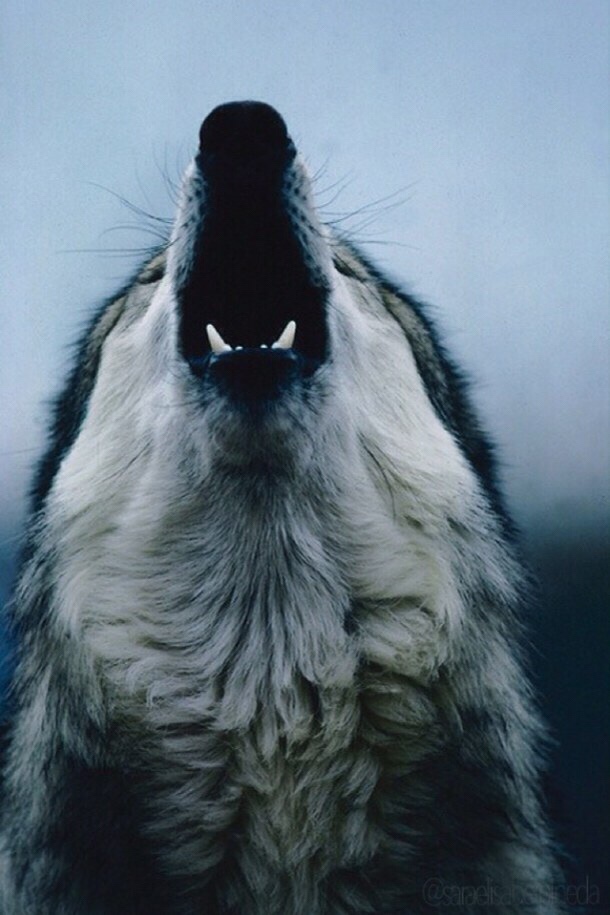 So would I come back to Soi Polo Fried Chicken?

When I next crave good Som Tam.